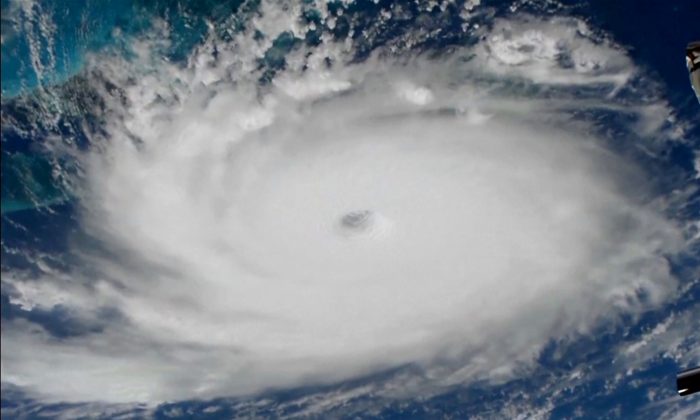 Hurricane Dorian is viewed from the International Space Station on Sept. 1, 2019. (NASA/Handout via Reuters)
US News

Hurricane Dorian has tied with the 1935 Labor Day Hurricane as the strongest Atlantic storm to make landfall in history.

The U.S. National Hurricane Center noted that the storm’s 185-mph maximum sustained winds puts the storm in a tie fort the second-highest sustained wind speed among all hurricanes in the Atlantic.

The storm has gusts over 220-mph winds as it hit the northwestern Bahamas, according to the agency in its latest update.

The 185 mph winds “is tied for the strongest Atlantic hurricane landfall on record with the 1935 Labor Day hurricane,” the NHC tweeted.

The eye of #Dorian has made a second landfall at 2 pm EDT (1800 UTC) on Great Abaco Island near Marsh Harbour. Maximum sustained winds were 185 mph at the time. This is tied for the strongest Atlantic hurricane landfall on record with the 1935 Labor Day hurricane. pic.twitter.com/O9hrotTTbS

“Dorian has become the strongest hurricane in modern records for the northwestern Bahamas,” the National Hurricane Center said on the morning of Sept. 1.

The NHC said that as of Sunday afternoon, Dorian was located over Great Abaco island.

“Dorian is expected to slow down its forward progression into Labor Day, which will lead to an extended period of time where hurricane conditions could be possible across the northern Bahamas,” AccuWeather Meteorologist Brandon Buckingham said.

It means that portions of Great Abaco and Grand Bahama islands might have to suffer through hurricane conditions for 24 hours straight.

The hurricane center said Dorian’s eye is currently located over Abaco Island in the Bahamas. Currently, it is “pounding Great Abaco,” the agency said at 4 p.m.

“This is a life-threatening situation. Residents in the Abacos should stay in their shelter. Do not venture out into the eye if it passes over your location,” the NHC said. Videos posted on social media showed people apparently going outside during the eye of the storm.

After passing over the Abacos islands, Dorian is expected to slam Grand Bahama Island later on Sunday.

A hurricane warning is in effect for Freeport, Grand Bahama, and Nassau, New Providence Island, according to The Weather Channel.