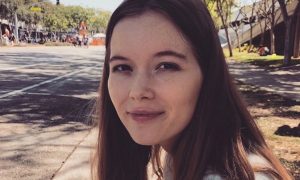 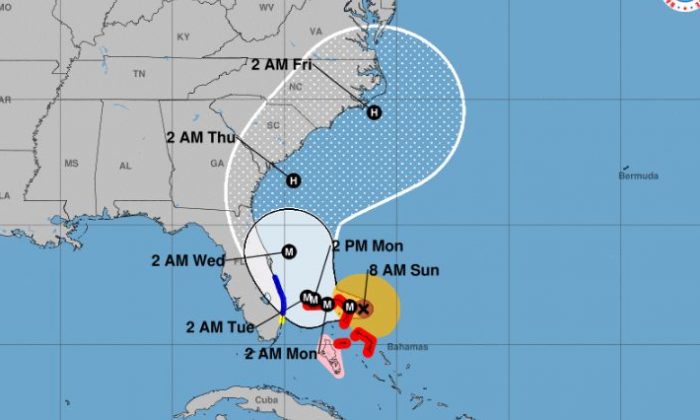 The storm is now about 25 miles east-north east of Great Abaco Island and 210 miles east of West Palm Beach, Florida. (NHC)
US News

Category 5 Hurricane Dorian has made landfall in the Bahamas along Elbow Cay in Great Abaco Island, according to the National Hurricane Center (NHC) in a special update at 12:45 p.m. ET on Sept. 1.

The storm is packing winds of 185 mph with gusts of over 220 mph, according to the agency.

“This is a life-threatening situation. Residents there should take immediate shelter. Do not venture into the eye if it passes over your location,” the forecaster said, adding that the storm surge is 18 to 23 feet above normal tide levels.

It said, “These hazards will cause extreme destruction in the affected areas and will continue for several hours.”

Video footage posted on social media showed that Dorian was already making an impact in the Bahamas.

We @WCKitchen are 80 miles from #HurricaneDorian eye & feeling this!! Imagine what the people of Abaco+Grand Bahamas will experience! Bahamas @opmthebahamas Goverment will need major help! @ClintonGlobal @RedCross @TeamRubicon …Florida should also get ready for major winds! pic.twitter.com/lIa9ghhUdk

Marsh Harbour, Bahamas about to experience something few on this planet have…the eye of a Cat. 5 Hurricane passing directly overhead. #Dorian pic.twitter.com/b8bjxw0SAI

Hours before that, the NHC said that Dorian became the strongest hurricane in modern record for the northwestern Bahamas.

Some forecasters and hurricane experts also said they were amazed by Dorian’s power.

I have never seen this. #Dorian pic.twitter.com/z4xMsNm8jo

“I have never seen this,” said Greg Postel, a hurricane expert with The Weather Channel, wrote on Twitter, noting Dorian’s extreme wind gusts.

Meterologist Brad Johnson, a professor at Florida State University, also wrote that he was “stunned” at its strength.

Maximum predicted ocean waves from Hurricane #Dorian will be 40-60 feet along the Florida coastline with 24-36 hours of continuous battering of the beaches.

As Dorian heads north, the largest waves > 80-feet will be on the eastern half of the storm. pic.twitter.com/Gw6n2mv0Oe

“No fluctuations. No eyewall replacement cycles. #Dorian just keeps getting stronger. I am stunned at the remarkable stability within one of the most unstable weather environments there is,” he tweeted.

This view of Hurricane Dorian is unlike anything I have ever seen. 📷 NASA pic.twitter.com/ScbhTI9Gw3