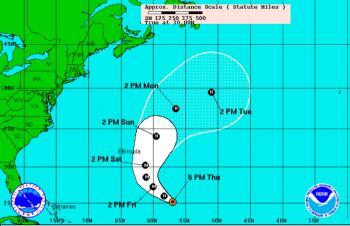 HURRICANE DANIELLE: A five-day forecast of Hurricane Danielle from the National Hurricane Center. (NOAA)
US

Helena Zhu
View profile
Follow
biggersmaller
Print
Hurricane Danielle is continuing on toward Bermuda, according to a US National Hurricane Center (NHC) advisory issued on Thursday at 5 p.m. EDT.

Danielle, which was downgraded yesterday but picked up strength again today, has maximum sustained winds now at 110 miles per hour.

As of Thursday night, Hurricane Danielle is located at about 680 miles southeast of Bermuda. If winds reach 111 miles per hour, Danielle will be considered a major Category 3 storm.

Hurricane Danielle has already strengthened to become the strongest storm of the 2010 Atlantic hurricane season.

The center is forecasting that Danielle will pass east of Bermuda on Aug. 29. "Interests in Bermuda should monitor the progress of Danielle," the center noted.

A Category 2 storm on the Saffir-Simpson Hurricane Wind Scale has extremely dangerous winds that cause extensive damage. A Category 3 storm can lead to devastating damage.

Several weeks ago, the NHC said the 2010 hurricane season will have a 90 percent chance of above-average hurricanes. Their report said that there will be eight to 12 hurricanes, and four to six major—Category 3 or above—storms.

Hurricane Katrina was a maximum Category 5 storm on the scale.