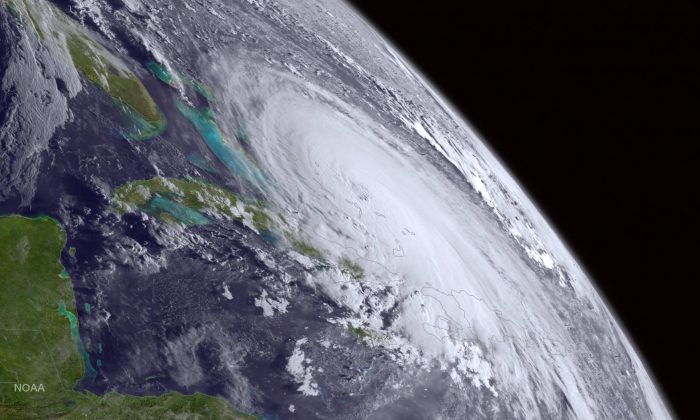 This satellite image taken Thursday, Oct. 1, 2015 at 8 a.m. EDT, and released by the National Oceanic and Atmospheric Administration (NOAA), shows Hurricane Joaquin. (NOAA via AP)
US

Hurricane and Rainstorm Are Locked in a Dangerous Dance

WASHINGTON — Hurricane Joaquin is locked in a dance with an extraordinarily heavy rainstorm that is already drenching the Carolinas. As the two draw closer together over the next few days, the effects could be disastrous for the East Coast.

The rainstorm is the dance partner that is leading this tango, and what it does will determine where Joaquin goes and how much of the East Coast floods. Storm No. 1 could push Joaquin out to sea or pull it into the heavily crowded Northeast.

At the same time, Joaquin is feeding the storm with moisture, contributing to its torrential rain.

Meteorologists are deeply uncertain about where Joaquin will go. But they warn that the record-breaking downpours from storm No. 1 are a sure and scary thing, at least for an area for South Carolina to Washington, D.C.

The latest National Hurricane Center forecast on Thursday had Joaquin veering a bit away from the Southeast coast and heading toward Long Island, New York. However, meteorologists were starting to look more favorably on an out-to-sea scenario.

It’s a messy picture, no matter what happens.

“The worst-case scenarios are very worrisome, and the best-case scenario is pretty bad even without a landfall because of the rain threat,” said Marshall Shepherd, a University of Georgia meteorology professor and host of the TV show “Weather Geeks.”

As a result, meteorologists are emphasizing that people shouldn’t focus solely on the hurricane. Streets and homes can still get walloped with rain and flooding associated with the hurricane even if it is 1,000 miles away. And because Joaquin is funneling tropical moisture into storm No. 1 — and can keep doing so from afar — even an out-to-sea Joaquin can worsen flooding.

“I know we like to focus on the hurricane,” said David Novack, director of the National Oceanic and Atmospheric Administration’s Weather Prediction Center in College Park, Maryland. But whatever track Joaquin takes, “we’re becoming increasingly confident and concerned about the heavy rainfall.”

The system that is now drenching the coast is a strange combination of conditions that Novack said he hasn’t seen before. It’s a low-pressure system 10,000 to 12,000 feet high that is unusual and deep for this time of year. And it’s not moving anywhere, so it can keep on dumping rain.

Storm No. 1 stretches from Florida to Canada on the weather map, resembling a giant hockey stick. That makes Joaquin the puck.

Seven Steps to Handle a Hurricane

One of the problems in forecasting Joaquin is that for a powerful storm, it isn’t moving much at the moment. It’s sort of adrift, and that’s kind of unusual, said Brian McNoldy, a researcher at the University of Miami.

The computer models have had a hard time with this storm. On Wednesday, only the European computer model predicted Joaquin pushing out to sea, while the others said it would aim toward the U.S. coast. The European model has been the best storm predictor of recent years.

Then overnight and on Thursday, more but not all computer simulations joined the European model in forecasting a push away from the coast.

“But that can change in the next round,” McNoldy said.

That’s why the hurricane center and others caution the public about getting fixated on one spot or one computer model.

Craig Fugate, chief of the Federal Emergency Management Agency, said FEMA is deploying staff from the Carolinas to New England just in case.

“If you don’t have a plan, you wait to the last minute, and you run out of options,” he said. “That’s a very scary event for you and your family. Don’t put yourself in that situation. Respect the power and danger of these storms.”