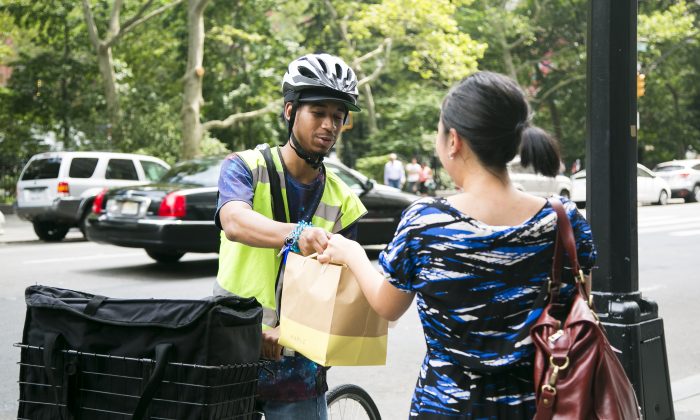 Huntington Beach city council rejected an urgency ordinance March 16 that would have capped delivery fees on companies such as DoorDash, Uber Eats, and Grubhub.

Third-party food delivery apps charge local restaurants up to 30 percent of the customer’s order. The motion would have limited those fees to 15 percent for restaurants.

“I get a little bit nervous when city is dictating how a business is supposed to operate,” Councilmember Barbara Delgleize during the meeting. “And that’s what this really feels like to me.”

This urgency ordinance, which needed approval from at least five councilmembers, would have expired after 120 days. It failed with a 4-3 vote.

Councilmember Mike Posey said by imposing restrictions on third-party delivery companies, they could choose to take their business elsewhere.

“There isn’t an infinite supply of app-based drivers to deliver food,” said Posey, who voted against the proposal. “Helping them by eliminating service opportunities is only going to drive those drivers somewhere else.

“Government shouldn’t be involved in modifying contracts or setting prices, whether it’s an emergency or a perceived monopoly.”

Posey argued that the best way to support local restaurants is to patronize them by picking up food personally and leaving large tips, rather than placing restrictions on delivery services.

Councilmember Natalie Moser, who voted in favor of the ordinance, said third-party delivery businesses can afford to take a lesser cut of the profit, unlike local businesses.

“Anything that we can do to assist them in that way, temporarily, I think that we should,” she said of locally-owned restaurants.

Mayor Kim Carr said the proposed ordinance made sense during the pandemic.

“I think long term, this doesn’t make any sense,” Carr said. “But in the short term to give them a little bit of relief. It does make sense.”

Mayor Pro Tem Tito Ortiz opposed the ordinance, saying: “It makes you want to say yes to help these small businesses, completely, but now all of a sudden we’re stopping another business from making money.”

“This small little piece could really mean the difference between a restaurant we all love staying open and having to close,” Kalmick said. “DoorDash and Uber Eats can take a little bit of a hit for our businesses here. If it’s a choice between the two, I’m always going to [choose] our businesses here locally.”

Councilmember Erik Peterson opposed the ordinance, saying that the 30 percent charge was not burdening restaurants.

“People aren’t being overcharged,” Peterson said. “They’re being charged what they signed contract to. We shouldn’t get in the way of those contracts. I talked to a bunch of restaurants. It’s just part of business right now… It’s not killing them.

“I haven’t heard of anyone going out of business or losing so much profit from a delivery service. They can do it themselves if they want. Pizza has been doing that forever.”

In those cities, third-party delivery service companies can’t charge restaurants a fee more than 15 percent of the purchase price on an online order.

These cities also forbid delivery companies from charging restaurants other fees, commissions, or any other costs that they choose to no greater than 5 percent of the purchase price.

On top of that, delivery companies are not allowed to take any part of a gratuity provided to the delivery person.

The ordinance also stops delivery companies from raising prices on the customer for any order, in an effort to offset the loss as a result of the ordinance.