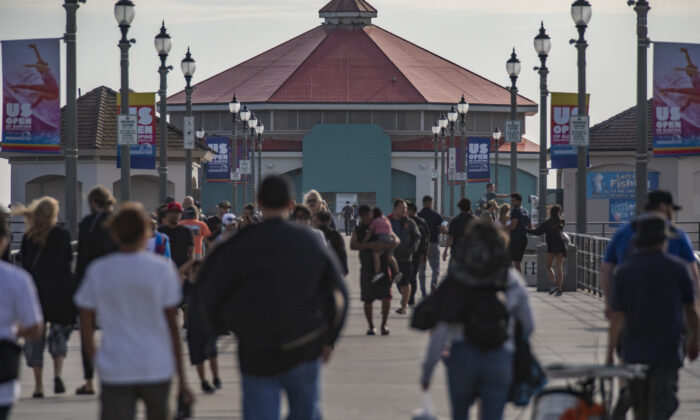 Two days after a fatal police shooting in Huntington Beach, California, on Sept. 25 during the U.S. Open of Surfing, bystanders reflected on the commotion that led visitors to flee in fear.

Locals walked the boardwalks in the early afternoon on Sept. 27, and crews cleaned up tents, bleachers, and the remaining scraps from the surf event.

A slight rain fell from the overcast skies and businesses opened their doors, and it appeared as if nothing had happened only a few days prior.

A witness to the Sept. 25 shooting, who asked to go by the pseudonym Ryan Johnson, told The Epoch Times that he recalled hearing police give Ronnie Andrew Garcia multiple warnings to stand down before the first gunshot shortly after 3 p.m.

Johnson was working at a booth for Visit Huntington Beach with his co-worker when the chaos broke out at the end of the U.S. Open’s itinerary for the day.

“The beach was clearing out,” Johnson said. “There were more people on the boardwalk. The beach was wide open. When it first happened, we thought it was fireworks at first. We were standing right across.”

The scene led bystanders into a panic, including Johnson, who fled the area with his coworker shortly after.

According to Johnson, police gave Garcia an ample amount of time to surrender before shooting. Johnson watched the first shot go off when Garcia fell to the sand.

Garcia then attempted to slowly get up when Johnson said he reached for something before being shot again. As Garcia fell once more, police rushed to perform CPR.

“It’s graphic; you can’t just unsee that for a while,” Johnson said.

With the U.S. Open occurring later in the year than usual, Johnson imagined what may have happened if the shooting occurred during the event’s regular scheduling into early August when hundreds of thousands of visitors attend.

Being farther away from the scene, he suspected the loud explosion-like sound to be fireworks.

“I was on 17th street when it occurred,” the resident, who declined to provide his name, told The Epoch Times. “It didn’t sound like it was a single shot. I thought someone got cut in half.”

Police responded to the U.S. Open after receiving reports about a suspicious man with a gun, the Huntington Beach Police Department said in a statement.

Garcia was reported by police to be noncompliant and was given many commands before the shooting occurred. The police department recovered the gun from Garcia on the scene.

The U.S. Open continued less than 24 hours after the incident for the conclusion of the surf event.