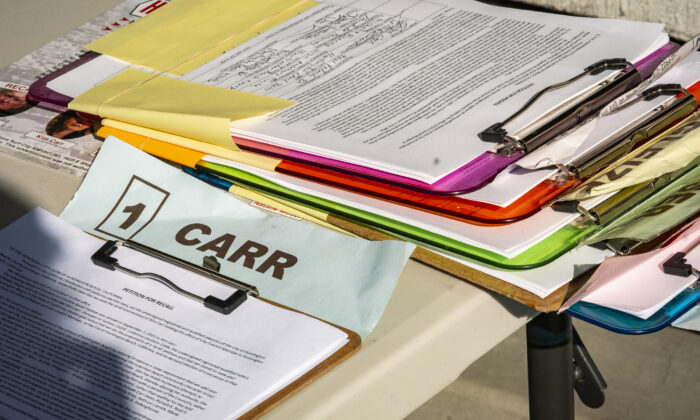 According to recall organizers, around 14,000 signatures for each councilmember were turned in to the Huntington Beach City Clerk’s office, far above the approximate 13,000 signature minimum requirement—representing 10 percent of current Huntington Beach voters—yet not quite the 20,000 recommended by the clerk’s office in the likely case that some signatures get removed during the verification process.

Organizers say their recent failed attempt, which they called a “gut punch,” to recall Degleize and Moser motivated them, saying volunteers worked around the clock at grocery stores to gather the requisite signatures this time around.

“Our volunteers just kicked butt,” Cari Swan, one of Save Surf City’s members, told The Epoch Times. “The number that we produced in the last couple of weeks was just amazing.”

Russ Neal, another one of the organization’s main members, said he was proud of how the community came together and noted that this recall was different than most, since it was fully volunteer-based.

“One thing that differentiates this recall effort is that it has been 100 percent volunteer, grassroots-driven without having big money, lawyers, political consultants, or anything like that to help,” Neal told The Epoch Times.

“We’re gratified for all the work that people did and we believe that the educational work we did and making citizens of Huntington Beach aware of the threat posed by Sacramento-driven high-density development in certain cities has been extremely important. And that the educational benefit will be paying U.S. political and electoral dividends in the months and years to come.”

In its petition to recall, Save Surf City cited issues such as the council’s stance on density housing, what they say is a lack of transparency, the financing of a homeless shelter, and “massive government expansion.”

Organizers additionally cited the council’s decision to not hold a special election after Mayor Pro Tem Tito Ortiz, a Republican, resigned in 2021 as another reason for their recall.

The council voted to appoint lawyer and civil rights activist Rhonda Bolton to the seat instead.

At this point, the city clerk’s office will review the petition documents and ensure the minimum number of signatures was collected, according to Huntington Beach City Clerk Robin Estanislau. If that number is reached, the petition will be delivered to the Orange County Registrar of Voters, which will conduct a verification process to certify that each signature is connected to a person registered to vote, which can take up to 30 working days.

If the registrar certifies the petition, the petition will then go to the city council, which would have 14 days to produce a resolution to call for a special election.