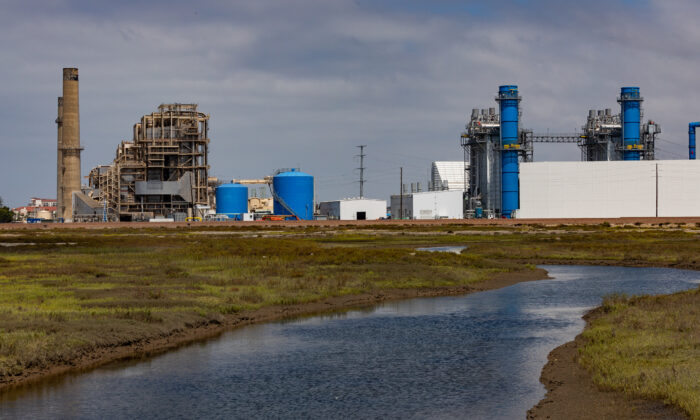 The Huntington Beach Energy Project located on the same property as the project site for the desalination plant in Huntington Beach, Calif., on Aug. 6, 2020. (John Fredricks/The Epoch Times)
Southern California

COSTA MESA, Calif.—As planes flew in for lunchtime landings at John Wayne airport, environmentalists gathered May 11 in the offices of Orange County Coastkeeper to discuss one of Huntington Beach’s most sensitive topics—a $1.4 billion desalination plant that has been on the discussion table for 22 years.

“When you’re going to spend $1.4 billion, it better be for something that you really need. And the fact is that this project isn’t needed in Orange County,” Ray Hiemstra of Orange County Coastkeeper said. “The way desalination works is it’s very local, so this water won’t go anywhere outside of Orange County if it’s ever produced. We have an abundance of water, we have a huge aquifer, and we have a huge recycling capacity that covers the vast majority of our needs.”

The meeting was held a day before the California Coastal Commission is expected to vote May 12 on the plant’s application, operated by Poseidon Water, during a public hearing at 9 a.m. at the Hilton Hotel in Costa Mesa.

Though the Coastal Commission has the final say, commission staff released a report on April 25 suggesting the project should be rejected.

The plant is set to be the largest, local, drought-proof water supply in all of Orange County, which has the capability of processing 50-million gallons of water per day, according to the project’s website.

But onsite activists suggested different outcomes to the project’s proposal.

The environmentalist urged the Coastal Commission to deny the permit Poseidon Water needs to complete the project.

“We are counting on the Coastal Commission to really take this seriously and to put people first over polluting profiteers,” León-Grossmann said. “We’re hopefully expecting tomorrow for our coastal commission to again put struggling Californians first.”

Poseidon Water notes the project is an environmentally sensitive facility that adheres to the state’s Environmental Impact reports.

“The desalination project has a certified Subsequent Environmental Impact Report and approved Coastal Development Permit from the City of Huntington Beach, an approved lease with the California State Lands Commission for use of the seawater intake and discharge facilities and a discharge permit from the Santa Ana Regional Water Quality Control Board,” a factsheet on the project states.

“In issuing its approval the Santa Ana Regional Board found that for the desalination project will impinge approximately 0.78 lbs. per day of fish, a fraction [less than 25 percent] of the daily diet of one brown pelican, and the discharge from the desalination plant will meet all federal and state receiving water quality standards.”

“Environmental Justice, tribal constitution, and climate rules the state of California are all denigrated by this project and it’s very difficult for people who are really looking at the details to understand how the governor and the state could support a project like this,” he said. “There is no condition Poseidon could possibly offer at this point that would solve the environmental justice and tribal deficiencies that have taken place to date.”

But Huntington Beach Seawater desalination facility officials posted that the water reliability project will provide billions of gallons of water, millions of dollars in tax revenue, and thousands of jobs while also protecting the Bolsa Chica wetlands that connect with the plant.

“Every day we see more dire predictions for California’s drought. This facility provides the opportunity for enhanced water reliability in the Orange County region, meeting approximately 10 percent of the region’s water demand and serving approximately 400,000 people,” Poseidon Water Director of Communications Jessica Jones said. “No water infrastructure project in the state of California has ever undergone this level of study and scrutiny. Should the Commission decline to approve Poseidon’s permit, the path is not clear for new largescale desalination projects in the state of California.”

With most of Orange County dependent on shared water sources that include the local groundwater basin, Colorado River, and the Sacramento Delta, Jones and her team at Poseidon Water see this project as a positive way to decrease the strain of these water sources and fight the consequences of water shortages.

“We look forward to the Coastal Commission’s hearing on the Huntington Beach desalination facility. This facility will be the most technologically advanced and energy-efficient desalination plant in the Western Hemisphere, with a zero-carbon footprint and powered entirely by renewable energy.”