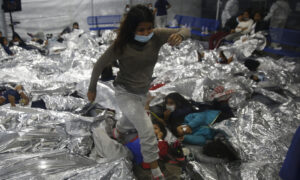 Then-Vice President Joe Biden and his son Hunter Biden at the reviewing stand to watch President Barack Obama's Inaugural Parade from in front of the White House in Washington on Jan. 20, 2009. (Alex Wong/Getty Images)
US News

President Joe Biden’s son Hunter will chronicle his personal struggle in the upcoming memoir “Beautiful Things,” according to his publisher.

The book will center on the younger Biden’s well-publicized struggles with substance abuse, said Gallery Books, an imprint of Simon & Schuster. The book is slated to come out on April 6.

“In his harrowing and compulsively readable memoir, Hunter Biden proves again that anybody—even the son of a United States President—can take a ride on the pink horse down nightmare alley,” author Stephen King wrote for the book. “Biden remembers it all and tells it all with a bravery that is both heartbreaking and quite gorgeous. He starts with a question: Where’s Hunter? The answer is he’s in this book, the good, the bad, and the beautiful.”

Biden wrote in his book: “I come from a family forged by tragedies and bound by a remarkable, unbreakable love.”

And the president and first lady, Jill Biden, released a statement on Thursday.

“We admire our son Hunter’s strength and courage to talk openly about his addiction so that others might see themselves in his journey and find hope,” they said.

It’s not clear if the book will make reference to the younger Biden’s controversial business deals that became the subject of scrutiny during the 2020 presidential campaign.

Hunter Biden’s business deals came under fire after the New York Post published a report that cited emails and messages procured from a laptop that allegedly had belonged to the president’s son about his business deals in Ukraine. Sens. Chuck Grassley (R-Iowa) and Ron Johnson (R-Wisc.) also raised questions last year about whether there was a conflict of interest.

Hunter Biden joined the board of the Ukrainian gas company Burisma in 2014, around the time his father, then U.S. vice president, was helping conduct the Obama administration’s foreign policy in the country. Trump and others argued that the younger Biden exploiting his father’s name.

Then-candidate Biden, during a presidential debate with President Donald Trump in late 2020, insisted that he didn’t know about his son’s business dealings and denied allegations of corruption.

And last year, Hunter Biden confirmed the Department of Justice was looking into his tax affairs. Biden has denied any wrongdoing.

Simon & Schuster has come under fire from conservatives after refusing to publish a book by Sen. Josh Hawley (R-Mo.) following the Jan. 6 Capitol breach.