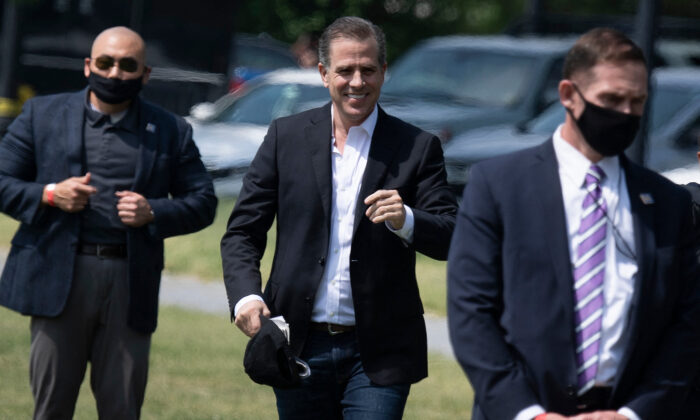 Hunter Biden walks to Marine One on the Ellipse outside the White House in Washington on May 22, 2021. (Brendan Smialowski/AFP via Getty Images)
Infiltrating the West

Hunter Biden, the second son of U.S. President Joe Biden, once held a stake in a Chinese company with ties to senior party officials of the Chinese regime, according to emails recently obtained by Fox Business.

According to a March 2017 email sent to him from his business associate Eric Schwerin, Hunter’s private equity firm, Rosemont Seneca Thornton, invested in China-based Harves Century Group—including a 5 percent stake in Harves Amusement Parks and ownership in Harves Sports and Entertainment. It is unclear if Hunter still has any investment in the group.

The Harves Century Group is based in Shenyang, the capital of northeastern China’s Liaoning Province, and it has a U.S. affiliate named Harves based in Washington, D.C. Harves describes itself on its website as a company that provides “unique experiences that merge sports, entertainment, art, food, music, and fashion,” and it is a partner of both the NBA and British soccer club Manchester United.

According to Fox, the Harves Century Group is backed by state-owned China Development Bank. The Group’s website names Shao Jinglan as its chairwoman.

The group’s ties to the Chinese Communist Party (CCP) were exposed in another email obtained by Fox. The email shows that Shao is the mother of Zhang Bo and Zhang’s father-in-law is Liu Cigui, who was the governor of China’s Hainan Province from 2015 to 2017 and the province’s party secretary from 2017 to 2020.

Liu Cigui had a long political career in China starting in the 1980s, holding different party positions in southern China’s Fujian Province. From 2012 to 2017, he was also a member of the Chinese regime’s Central Committee, which is tasked with choosing CCP members to sit on the 25-member Politburo, the most powerful decision-making body in China.

Currently, Liu Cigui is one of the vice directors of the Foreign Affairs Committee at China’s rubber-stamp legislature, the National People’s Congress.

The second email was sent to Hunter in 2015 from Francis Person, who was a former aide to Joe Biden when the latter was a senator and U.S. vice president.  In 2016, Person lost in the 2016 House race to then-incumbent Rep. Mick Mulvaney (R-S.C.).

According to LinkedIn, Person was president of Harves from 2015 to 2018, during which he “helped guide the formation of the Harves [Century] Group headquartered in Washington, D.C.” He is now the chief chief executive officer of Harves Global Entertainment.

As for Zhang, he has been chairman and the chief executive officer of Harves since February 2014, and he describes the company as a “family business,” according to LinkedIn.

Zhang’s connection to the Chinese regime was also evident in a 2013 Foreign Agents Registration Act (FARA) filing (pdf), which was first reported by Fox. The filing named Zhang as a “foreign principal” for his relationship with Liu Guoqiang, who was at that time vice chairman of the Liaoning Provincial Committee of the Chinese People’s Political Consultative Conference (CPPCC), a political advisory body.

Liu Guoqiang had a long political career in his home province of Liaoning before his retirement in 2017. He was vice governor of the province from 2001 to 2013. He was put under party investigation for corruption in July 2020 and subsequently expelled from the Party in January 2021.

Other emails show that Person and Zheng met with Hunter and Schwerin in Washington “on multiple occasions,” Fox wrote. In a 2016 email, Hunter called Zhang a “good friend and business colleague.”

A 2016 email that Fox obtained included Schwerin telling Zhang about the NBA’s expansion in China.

“If Liaoning can get one of these stadiums that would be a big help in your efforts to get more NBA related content in Liaoning,” the email said, according to Fox.

In November 2020, NBA China, a separate business arm of the NBA, and Harves issued a joint press release (pdf) announcing their partnership to develop NBA-themed entertainment centers in China.

“As part of the partnership, Harves, plans to open six NBA-themed entertainment centers across China, with the first opening by 2022,” the release states.

According to Chinese media, the first center is set to open in Suzhou, a city located near Shanghai.

Hunter Biden’s business dealings have long been under scrutiny. In September 2020, a Senate report found that he began developing associations with Chinese nationals beginning in at least 2009, the year he co-founded Rosemont Seneca Partners.

According to the report, these financial connections “accelerated while his father was vice president and continued after he left office.”