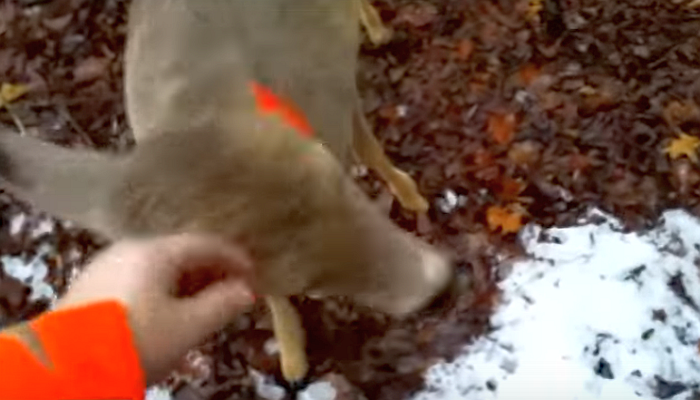 A hunter in Wisconsin was inspired to rethink his priorities after an unusual encounter with a buck.

Brian Powers was hunting in a forested area in Wisconsin when he spotted the deer and took aim, but right before he pulled the trigger, he noticed there was an orange scarf tied around its neck, indicating that it must have belonged to someone. Orange is the color used to tell hunters not to shoot. People notice it but deer don’t.

“All of a sudden here comes a deer, and he has an orange scarf on. And he just kept walking and I said, ‘Oh my, he must be somebody’s pet or being fed by someone or being taken care of by somebody,” he said, as reported by Local12.

After making a phone call, Powers said the deer approached him.

“Right when he got parallel on the logging road to where I was off the road, he stopped and turned and looked right at me and I said, ‘Wow this is unbelievable,’ so then I called him over and he walked right in,” he told the broadcaster.

In a YouTube clip, he is heard telling the deer: “It’s a good thing someone put that orange scarf on ‘ya buddy. Keep your head low man, make sure people see that orange, all right?”

Speaking with Inside Edition, Powers noted that the deer showed “no fear” to humans.

“I called him over and he came right over,” Powers said.