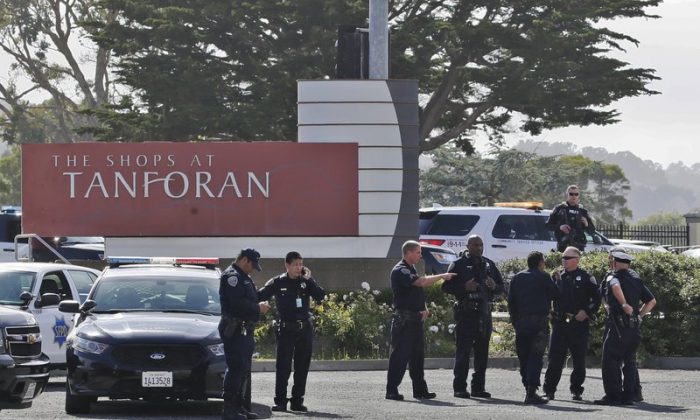 Police investigate at the scene of a shooting at the Tanforan Mall in San Bruno, Calif., on July 2, 2019. (Stephanie Mullen/AP Photo)
US News

Hunt on for Shooters After 2 Shot at California Mall

SAN BRUNO, Calif.—Customers and employees fled for cover or locked themselves inside stores as two shooters opened fire on each other inside a Northern California mall, wounding two young bystanders before fleeing.

Police on July 3 continued to hunt for the suspects after the second California mall shooting in a month spread panic and shut down a nearby train station, scrambling rush-hour commuter traffic.

Shots were reported at The Shops at Tanforan in San Bruno shortly before 4 p.m. Tuesday.

Paula Silva was working at a Barnes & Noble bookstore when she saw people running.

Some young people ran inside and one told her that somebody was shooting.

Silva and her fellow employees locked the doors and turned off the lights and moved customers into the stockroom, she told KGO-TV.

“We were hiding in the dark,” she said.

They waited for police to escort them out.

“It was pretty scary. Seeing all my co-workers scared caught me off guard,” she said.

Eric Rosales said he and his family heard two or three gunshots as they arrived to see a movie at the shopping center about 10 miles south of downtown San Francisco.

“We dashed inside the theater,” said Rosales, of San Bruno. “We were like in a crouched position, just trying to hide out.”

A boy of about 15 and another teen around 18 years old were wounded, said Brent Andrew, a spokesman for Zuckerberg San Francisco General Hospital. One was in critical and the other in serious condition Tuesday night, he said.

Two people who were not shot were treated for minor injuries and released, San Bruno Fire Chief Dave Cresta said.

Investigators believed at least one of the shooters, and maybe both, fled on a train. The San Bruno train station, which is adjacent to the mall, was closed for several hours but reopened and train service resumed shortly after 8 p.m., authorities said.

The mall shooting follows a June 3 attack that wounded one man inside a Southern California mall.

A Southern California gang member has been charged with a shooting that wounded a man inside one of the nation’s largest malls.

Prosecutors on Tuesday said Jose Manuel Salazar, a 22-year-old gang member from Bellflower, has been charged with attempted murder and other crimes. It’s unclear whether he has an attorney.

He’s accused of shooting a man inside the Del Amo Fashion Center in Torrance. The shooting south of Los Angeles sent customers and employees running from the mall. Dozens of police swarmed the scene. They searched hundreds of stores but didn’t find the gunman until he was arrested Saturday in Redondo Beach.

The victim was treated at a hospital.

Authorities haven’t released a motive for the attack.