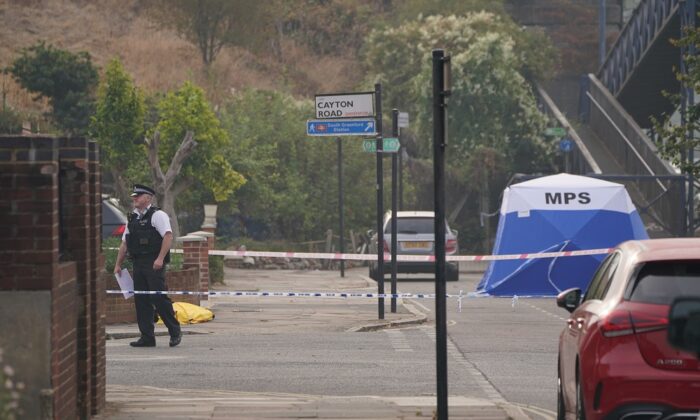 A police tent at the scene where Thomas O'Halloran who had been riding a mobility scooter was stabbed to death, in Greenford, west London, on Aug. 17, 2022. (PA)
UK

Detectives in London are hunting a killer who stabbed an elderly man as he rode his mobility scooter in broad daylight within yards of one of the capital’s busiest roads.

Thomas O’Halloran, who was 87, was attacked at 4 p.m. on Tuesday close to the A40 in Greenford, west London, police said in a statement.

The Metropolitan Police have released an image of a suspect seen running away from the scene and Detective Chief Inspector Jim Eastwood, who is leading the murder inquiry, said: “We are keen to identify the man in the CCTV images as a matter of urgency. He is clearly a dangerous individual and people are advised not to approach him, but to call us immediately on 999 if they know him or have any information regarding his whereabouts.”

Frasley Coutinho, who lives nearby, told PA Media he saw a group of teenage boys surround the victim on the north side of the road, not far from the entrance to South Greenford station. But it is not clear if they were his attackers or people who had come to his aid.

He said, “I saw a couple of people gathering around him and then he drove past and stopped further up, and then there was a group of young boys around him.”

An air ambulance was despatched and paramedics attended the scene but were unable to save the man’s life.

Detective Chief Inspector Jim Eastwood from the Met’s Specialist Crime Command said in a statement: “My officers are working to understand what has happened to this man, and we need the public’s assistance. I’m asking for anyone with dash cam or cycle helmet footage to contact us if they were using the Western Avenue A40 Eastbound in the proximity of Cayton Road and Welland Gardens between 15:15 hrs and 16:15 hrs.”

He urged the public to contact the police with any information they had on the attack.

Local resident Simran Advani, 25, said she often saw the man on his scooter and he would always smile to her, adding: “He was a nice old man. He often goes round the block, he always went on the road not the pavement.”

‘Horrific Crime … Which Will Cause Considerable Alarm’

Chief Superintendent Sean Wilson, the local area police commander, described it as a “horrific crime” and said in the statement, “This is an awful incident that will understandably cause considerable alarm to people locally and across London.”

The Mayor of London, Sadiq Khan, wrote on Twitter: “I’m devastated that an elderly man was killed in a horrific attack this evening. My thoughts are with the victim’s loved ones.”

Tuesday’s incident was the 58th homicide in London and came only 24 hours after 58-year-old Aziza Bennis was stabbed to death in Acton. Her daughter, Hanna Bennis, 21, has been charged with her murder.