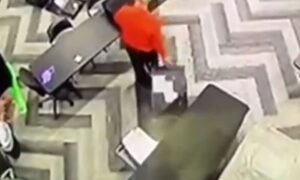 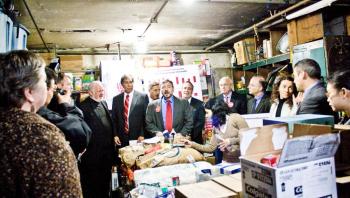 By Matthew Robertson
Print
NEW YORK—A cohort of representatives from local church and community groups, along with local politicians and the press, all piled into the Jan Hus Presbyterian Church’s cramped basement food pantry on East 77th St. in Manhattan on Wednesday to learn about new funds they are to receive from the federal government.

Five hundred million dollars has been freed up for federal anti-hunger spending in New York City, speakers in the pantry announced. The vast sum of funding has allowed an extra 21 percent of New Yorkers—thought to have been imperiled by the economic crisis since last year—to receive meals at the city’s soup kitchens, according to the New York City Coalition Against Hunger, who helped organize the event.

“Low-income hungry New Yorkers are being swamped by an ever-growing economic hurricane!” Joel Berg from the coalition said to those assembled. “But it’s federal funding that has been their life raft, helping them survive,” he said.

“This is the first year in the eight years that … pantries and kitchens actually have at least marginally more ability to feed the growing numbers than the last year,” he said. “And that is because of federal funding.”

The half-billion dollar injection from the U.S. Department of Agriculture, part of which will be used to allow food stamps usage at farmers’ markets, is on top of a $2.1 billion spending spree the federal government has committed to.

One relatively small piece of the pie ($609,292) will go directly to a program to help New Yorkers who lost their certification for the food stamp program to regain it.

“We’re talking about very poor people; when they lose that for several months, it deepens the problem they’re faced with,” said Kevin Concannon, undersecretary of agriculture for food, consumer, and nutrition services. He is responsible for the entire federal nutrition assistance safety net, food stamps, and school meals.

The grant is going to be funneled through the city and in ten sites across the city, he said. It’s also meant to help groups like Hispanics, the unemployed, and elderly people know they’re eligible for assistance, he said.

Another under secretary of the USDA, Edward Avalos, who takes care of marketing and regularity programs, also spoke at the event—in Spanish—elaborating on other details of the program.

Those on the receiving end of the funding were satisfied with the course of events. “I never really liked fundraising very much, but I have no compunction about asking you or anyone for help to serve the people that we serve,” said Pastor Ray Bugnuolo of the Jan Hus Presbyterian Church.

“We’re on the edge, because that’s where we live. There truly are situations where the people who come to us and get a garment, get something to eat at the end of the day, they might not otherwise make it through the night.” he said.

Beyond all the funding, he said, “We know there will always be more to do.”