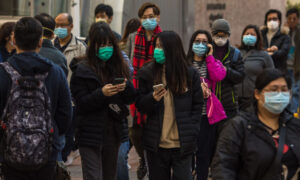 India and The Philippines Report First Case of Coronavirus
0 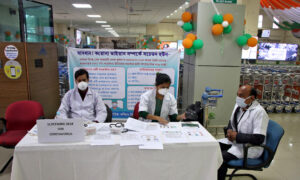 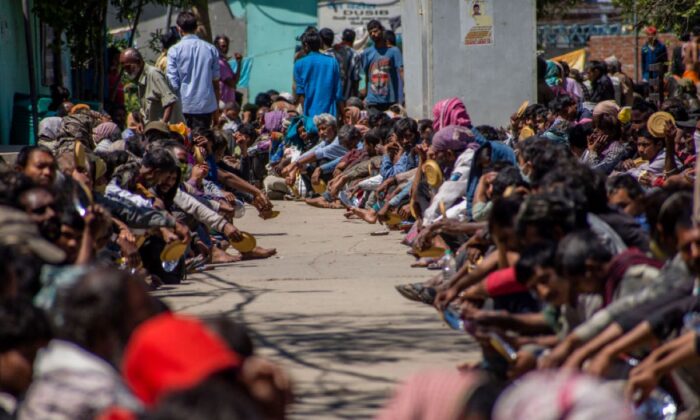 Indian migrant workers, daily wagers, laborers, and homeless people wait for food outside a government-run shelter as a nationwide lockdown continues in an attempt to stop the spread of the CCP virus in New Delhi, India, on March 28, 2020. (Yawar Nazir/Getty Images)
India

A week after India imposed a three-week nationwide lockdown to control the CCP virus outbreak, community workers are worried about the migrant labor class stranded on the capital’s border, saying that hunger and chaos may kill more people than the infection.

The second-most-populous country of 1.3 billion people had 1,024 confirmed cases of infection and 27 deaths as of March 29.

On March 24, Indian Prime Minister Narendra Modi extended to April 14 a lockdown that originally was to end March 31, to help the country prepare for the pandemic.

On March 28, Indian media reports said thousands of migrant workers who lost their livelihoods because of the lockdown gathered at New Delhi’s Anand Vihar Bus terminal to board buses arranged by the Delhi and neighboring Uttar Pradesh state governments to go back home.

While the number couldn’t be confirmed by The Epoch Times, some nonprofits shared on social media that the number might be in the hundreds of thousands.

“I would firstly like to seek forgiveness from all my countrymen” for their woes, Modi said March 29 from India’s capital in a nationwide radio address.

The poor “would definitely be thinking what kind of prime minister is this, who has put us into so much trouble,” he said, urging people to understand there was no other option.

According to government statistics, each year, more than 9 million migrant workers move from India’s rural areas to large population centers to find work at construction sites or factories, sending money back to their hometowns and villages.

Sunil Kumar Aledia, who has been working with the homeless population of Delhi for two decades, said he hasn’t seen anything like the exodus that he’s witnessed since the lockdown.

“They forgot the marginalized class. India is no longer an agricultural nation. We are now a land of laborers,” Aledia, the executive director at the Centre for Holistic Development, told The Epoch Times.

Aledia has a special permit issued by officials that allows him to go to work during the lockdown; every day, on his way back home, he picks up bananas from a food bank to distribute to migrant workers he finds walking long distances home.

The chaos on the roads has been an emotional experience for Aledia, who says he’s haunted by seeing a migrant family walking along the road and a small child begging his father to carry him because he was too tired to walk.

Over the past week, Aledia has seen people walking and carrying their possessions on their four-wheeled carts that were used to sell vegetables and wares on Delhi streets before the lockdown and also families on three-wheeled rickshaws.

Every day, he has been visiting 2,500 migrant workers who are building an overpass in the village of Sarai Kale Khan. He said they didn’t have enough to eat.

“I called on the Delhi government’s helpline number for food and instead of food for 2500 people, they sent food for only 200,” said Aledia, adding that 1,800 of them were still lodged in the building on March 29.

This week, the Indian government pledged $22.6 billion to support the migrant workers who are stranded without work and far from home, including providing community kitchens and food deliveries.

“We have installed more than 12 thousand vehicles in the state to transport vegetables, milk, medicines and food grains from door to door,” Uttar Pradesh Chief Minister Yogi Adityanath said on his official Twitter on March 25.

“No person at night shelters, bus, and railway stations … will stay hungry or thirsty.”

But for Aledia, this reverse exodus from the national capital to villages is extremely difficult to manage because of its scale. He fears more people may die from hunger than from COVID-19, the disease caused by the CCP virus.

The Epoch Times refers to the novel coronavirus, which originated in the central Chinese city of Wuhan, as the CCP virus because the Chinese Communist Party’s coverup and mismanagement allowed the virus to spread throughout China before it was transmitted worldwide.

“As per the action plan, all shelters for homeless should have been locked down and sanitized but this didn’t happen. Instead, the Chief Minister of Delhi asked anyone hungry to go there for food,” Aledia said, described how lockdown that was enforced for quarantine became impossible for the migrant class because of hunger and government announcements that he alleges to be “politically motivated.”

The capital of India has 234 shelters for the homeless, according to Aledia. On March 21, the administration of Delhi state announced that free food will be served to the homeless and all others stranded because of the lockdown.

When asked if the crowds gathering for food at the shelters are being tested for the virus, Aledia said, “Health is a privilege for these people. Their concern is food.”

Manjeet Singh works with homeless people in New Delhi. He had gone home 323 miles away in Pathankot city in Punjab state when the lockdown was announced. He said he had to secure a special permit by the district magistrate of his city to travel, and then biked for nine hours on March 28 to reach Delhi.

Singh found all markets closed on the way and was stopped at about 10 police checkpoints set up along the national highway to control the influx of people during the lockdown.

“At many places, I saw people walking on foot. Some migrant laborers from Uttar Pradesh were ferried in trucks and left on the interstate border,” said Singh, who supervises six shelters for the homeless at the Cannaught place locality.

Along the way, Singh witnessed many acts of kindness, in which locals had gathered to offer rice and water to the stranded migrant laborers.

“I’m responsible for the shelters here,” he said when asked why he hadn’t stayed at home and why he was possibly risking his life during the lockdown.

Singh reiterated what many religious Indians believe about life and death.

“Whenever death has to come, it’ll come. I’ll face it,” he said.

The CNN Wire and Reuters contributed to this report.