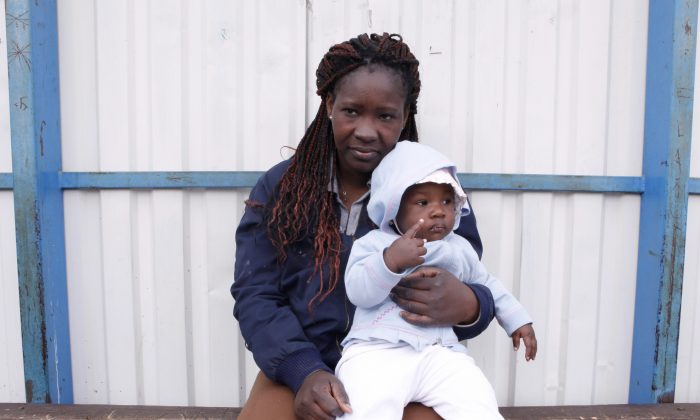 In this photo taken on Monday, April 6, 2015, one year old Kendra sits on the lap of her mother Sandrine Koffi, 31, at a bus stop after being reunited with her mother in an Asylum Seekers reception center, Debrecen, Hungary. Hungary is the most popular back door for tens of thousands of migrants annually who want to breach the perimeter of the European Union without obvious risk of death. Their long journey through the Balkans, often on foot and at night, proves to be full of disappointment and danger, but not the mortal peril of a North African sea crossing to Italy - a journey that has produced more than a thousand dead in the southern Mediterranean this month alone. (AP Photo/Dalton Bennett)
Europe

BUDAPEST, Hungary— The Hungarian government says it is planning to tighten the law on migrants and asylum seekers, making it easier to expel those who entered the country illegally.

A draft amendment to the law on asylum rights, released late Friday by the interior ministry, says the changes are needed to speed up and improve the identification of legitimate asylum-seekers and allow the deportation of economic migrants.

The ministry said Hungary had received 53,300 asylum requests so far this year compared to 42,700 in all of last year. Most asylum-seekers quickly move further west to countries like Germany and Sweden before they claims are resolved.

On Wednesday, Hungary announced plans to build a 4-meter (13-foot) high fence on its southern border with Serbia to stem the entry of migrants.