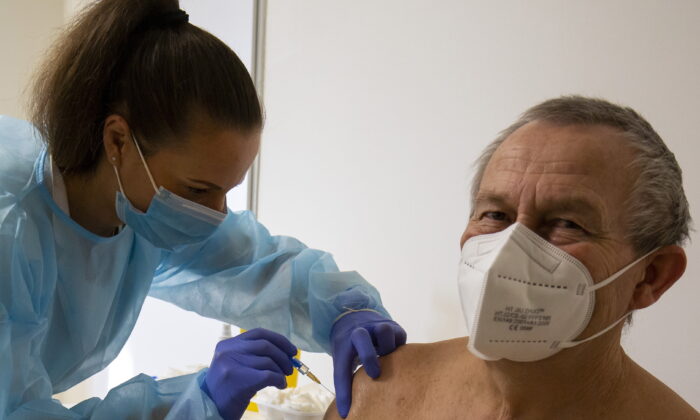 Nurse Szilvia Lukacs administers a shot of the Russian vaccine Sputnik V to a patient at Zala County Szent Rafael Hospital in Zalaegerszeg, Hungary, on Feb. 19, 2021, as the vaccination with Sputnik V against the new coronavirus continues in the country. (Gyorgy Varga/MTI via AP, File)
Europe

Hungary Closes Stores, Schools to Curb Surge Due to Variants

BUDAPEST, Hungary—Hungarians on Monday awoke to a new round of strict lockdown measures aimed at slowing a record-breaking wave of COVID-19 hospitalizations and deaths.

A rapid rise in pandemic indicators since early February prompted Hungary’s government to announce the new restrictions, including closing most stores for two weeks and kindergartens and primary schools until Apr. 7. Most services are also required to cease operations, and the government urged businesses to allow employees to work from home. Grocery stores, pharmacies, gas stations, and tobacconists can stay open.

Hungary’s high schools have been remote learning since November and its bars, restaurants, and gyms have been closed since then as well.

Hungarian Prime Minister Viktor Orban has warned that the strain on the country’s hospitals will soon surpass any other period in Hungary since the pandemic began, and that failing to impose harsher restrictions now would result in a “tragedy.”

“The next two weeks will be difficult … but if we want to open by Easter, we’ve got to close down,” Orban said Friday on a Facebook video.

The number of patients on ventilators in Hungarian hospitals has more than doubled in the last two weeks, with 806 patients on Monday compared to the previous peak of 674 in early December.

Deaths have also risen sharply, with nearly 16,000 confirmed deaths in a country of fewer than 10 million. The number of COVID-19 patients being treated in hospitals is also likely to break its previous record on Tuesday.

“We can see that the third wave is spreading very forcefully, mainly due to (virus) variants,” Hungary’s chief medical officer Cecilia Muller said Sunday. “We can’t do anything else now but break the chain of infections.”