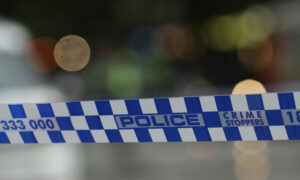 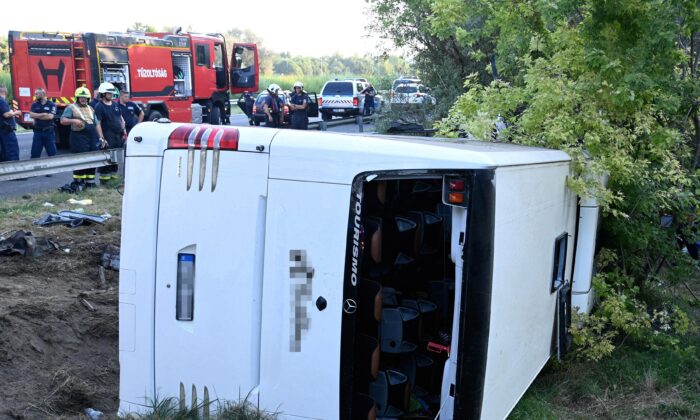 View of the bus that rolled over on the M7 motorway, killing at least eight people, in the early hours of Sunday near Szabadbattyan, Hungary, on Aug. 15, 2021. (Zoltan Mihadak/Pool via Reuters)
Europe

BUDAPEST, Hungary—A bus traveling on a highway in Hungary crashed through a guardrail and tipped over early Sunday, killing at least eight people and injuring dozens, police said.

The crash occurred on Hungary’s M7 highway near the town of Szabadbattyan, between the capital, Budapest, and Lake Balaton, at just before 5 a.m. Sunday morning. The bus had Hungarian license plates and was in the lane traveling toward Budapest.

Pal Gyorfi, a spokesman for the national ambulance service, told Hungarian news agency MTI that in addition to the eight deaths, another eight people sustained serious injuries, and 40 had minor injuries.

The bus broke through a guardrail and collided with a bridge pillar, according to Anett Szabo-Bisztricz, a spokesperson for the Fejer County Directorate-General for Disaster Protection. Firefighters worked to free 14 people trapped in the bus, while the rest were able to exit the bus on their own, she said.

News site Hvg.hu reported that the bus was transporting Hungarians from summer holidays in Croatia, and that it had departed the Croatian island of Krk late Saturday. It said the bus driver was among the dead.

Writing on Facebook Sunday, Hungarian Prime Minister Viktor Orban expressed his “sincere condolences to the families of the victims of the bus crash.”

“Let us look after each other on the roads,” Orban added.