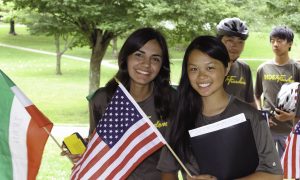 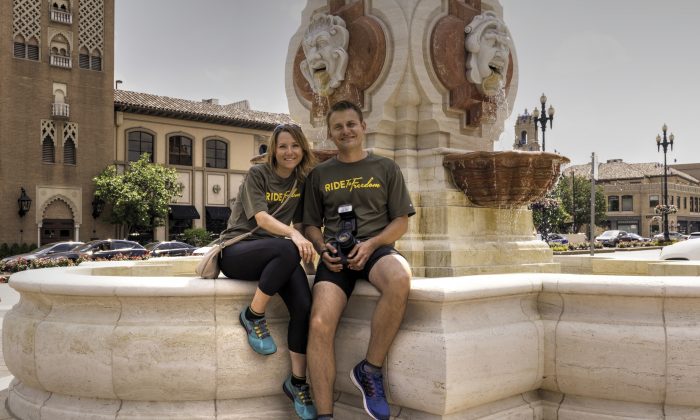 Ride2Freedom cyclists Marton and Kata Baranyai, from Hungary, sit on one of the 200 fountains in Kansas City Missouri at the Country Club Plaza, June 27, 2015. (Cat Rooney/Epoch Times)
Ride2Freedom

KANSAS CITY, Mo.—Marton Baranyai, 23, and his wife, Kata Baranyai, 25, are Ride2Freedom cyclists from Hungary, who joined the 3,000 mile biking journey from Los Angeles to Washington D.C. with 25 youths from 14 countries. Unlike the other Ride2Freedom ambassadors, they are working adults and a couple.

They are doing the 3,000—mile ride for the same reason as the teens. “We need to save orphans because the government in China is persecuting the peaceful meditation called Falun Gong. The three principles [of Falun Gong] are truthfulness, compassion, and tolerance and if you do this in China, they put you in jail,” said Mr. Baranyai. He spoke gravely about the danger to Falun Gong practitioners in communist China. “They torture you to death, and your children become abandoned. Thus, because this is going on since 1999, thousands of children are orphaned and we would like to raise awareness that this is happening now in the 21st century. We would like to put pressure on the CCP [Chinese Communist Party] so that children are not persecuted anymore.”

The Ride2Freedom team stopped at the Country Club Plaza in Kansas City, Mo. for a welcome rally and press conference on June 27, 2015. After the rally, the Baranyais talked about how they joined Ride2Freedom.  They got a letter from Germany “that there is going to be a bicycle tour to save orphans,” meant for teenagers. But the couple, both of whom practice Falun Gong, wanted to join the mission anyway.

Mr. Baranyai wrote back to the organizers and said they were not teenagers, “but if they don’t mind, we would love to come. And then they said that we can come.”

Both of them are fit and in the habit of cycling.  Mrs. Baranyai said that her “hometown is a small city in Hungary. It is so flat and everybody likes to bicycle. Everybody uses a bicycle and it is normal transportation in our hometown. I usually use a bicycle.” And for her husband, from the big city of Budapest, cycling was a hobby. As a working adult, he commuted in traffic by bike 45 minutes each way.

“In America it is even better. American people are very nice, and very open. ” Marta Baranyai, Ride2Freedom cyclist from Hungary

He is a software engineer, and is his own boss. “But I did talk to customers to see if they could let me go. Luckily, our main customer is a Falun Gong practitioner from Germany, and he said, of course!” The client gave them a German bicycle and arranged some sponsorships, according to Mr. Baranyai. “So he’s wonderful.”

They started winning support for Ride@Freedom before they left Hungary, and it was nice, according to Mrs. Baranyai. “In America it is even better. American people are very nice, and very open. We go to the people and speak about our project. We tell them this is very important, and a very good mission. We ask them to please help us, and to take a selfie with us to post on social media, and they say, “sure,” because it is important, and they want to rescue orphans. It’s a good mission.”

One of the challenges of Ride2Freedom for Mrs. Baranyai was communicating in English. Though she reads it well and has done translation, she felt surprised and worried that it was so hard for her to speak and understand it in America. But as the ride goes on, it has gotten easier, she said, “and the kids are very nice to me.”

Ride2Freedom is a team of 25 youth and 10 parents and other helpers who spent the Fourth of July in Chicago before heading to Philadelphia. However, once in Washington D.C., they will end the bike portion of the tour with a public concert and candlelight vigil, on Friday, July 17 at the Lincoln Memorial. They will then travel to New York City to the United Nations and then a select few will fly to China to rescue the five orphans.