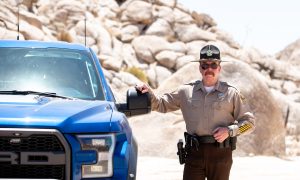 A veteran in Austin, Texas, shot and killed himself in front of hundreds of people at a Veterans Affairs clinic, according to local reports.

KWTX reported that many people in the building were unaware that he killed himself for some time later.

A therapy class occurred for about an hour after the shooting, the report said.

“All of a sudden, over the intercom, they have this statement about everyone must clear the building including staff, so it was a little surprising,” veteran Ken Walker told a local news outlet.

Witnesses reported hundreds of people were inside the room when a man shot and killed himself.

Veterans were later asked to leave the building, triggering mass confusion. The clinic was shut down amid an investigation.

“When he found out he couldn’t get the help he needed there, he chose to take his own life,” McLennan County Veteran’s Service Officer Steve Hernandez said.

He said that the unnamed veteran was enrolled in the Phoenix program with the Olin E. Teague Veterans’ Medical Center in Temple, Texas, and was discharged. His case was transferred to Austin, the report said.

Another death, this time inside a VA clinic.

Hernandez said there are problems with the VA system in that “there is no facility in the state or in the country dedicated to serving veterans with mental health issues.”

“What’s going on is concerning and the actions undertaken so far speak for themselves,” Hernandez continued. He said there was a Waco campus that served veterans with those needs.

Reddit user Diane_Kirkendall shared a photo that was taken in the waiting room of the suicide.

“Veteran takes his life in front of large American flag. The news won’t post this, they would rather sweep it under the rug and pretend Vet suicide doesn’t happen. There are hundreds of us vets who will never forget what happened yesterday at noon. RIP young brother,” said the user on Reddit.

Guns are prohibited in VA hospitals and clinics, but the Austin facility doesn’t have metal detectors, KWTX reported.

The Military Times, meanwhile reported that many clinics use randomized bag searches to detect the presence of weapons.

Between October 2017 and November 2018, the Times noted, some 19 veterans died via suicide at medical facilities.

Marine Col. Jim Turner put on his service uniform and went to the Bay Pines Department of Veterans Affairs and killed himself in December 2018, the Times noted.

“I bet if you look at the 22 suicides a day you will see VA screwed up in 90 percent,” his note, which was placed next to his body, said.

According to officials, statistics show there were 530 suicides by Texas veterans in 2016, reported KRIS-TV.

Poll: Majority of US Veterans Approve of Trump

Most military veterans have positive views of President Donald Trump and his job performance, signaling continued support for the man who vowed during his 2016 presidential campaign to fix the problems faced by veterans.

Continuing on that trend, almost 6 in 10 military veterans voted for Republican candidates during the November midterm elections.

Fifty-one percent of veterans also believe the Trump administration has made the country safer from terrorism. A majority of current service members polled, 59 percent, said Trump is a strong leader. The president acknowledged the poll’s results on Twitter, thanking his veteran base.