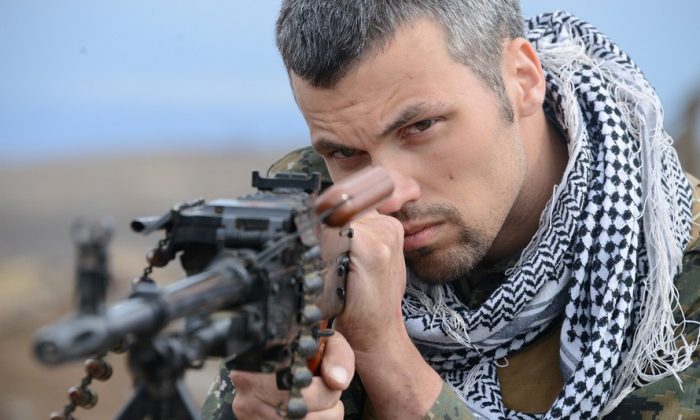 American Jordan Matson with the anti-ISIS forces fights with the Kurdish YPG in Syria in this file photo. (Kurdishtruggle/Flickr/CC BY)
Middle East

For some, it would be their worst nightmare to be sent to the Middle East to join anti-ISIS fighters on the ground. For others, it’s a dream come true. Whether out of a sense of moral imperative or simply because of a militant urge to fight, there are currently at least 300 active Western anti-ISIS fighters, including over 100 from the United States.

They hail largely from about 20 Western countries, including the United States, the U.K., Canada, and Sweden. They were identified during a year of research by the London-based Institute for Strategic Dialogue (ISD).

The think tank also found self-drafted fighters from corners of the world as far-flung as South Korea, Indonesia, and Colombia. The detailed report of their findings, “Shooting in the Right Direction: Anti-ISIS Foreign Fighters in Syria and Iraq,” was published in August.

“People have been slightly taken aback at the scale—that we’ve managed to find 300 of these people,” said Henry Tuck, a report co-author and policy and research manager at ISD. Tuck added that “the sheer number of veterans” was also surprising. Many are natives of countries with a history of military involvement in the region in the past decade.

The level of open dialogue about plans and intentions online seems less rational. Many go as far as discussing routes of travel. North Americans tend to enter via Europe, then go to Turkey, and then Iraq. Another route leads from Europe to the Gulf and then Iraq. Once on the ground, they use a well-established network of safe houses to move about.

Though many don’t actually see military action, unguarded discussions online about recruitment make it fairly easy to get to the front lines.

“That was something we were surprised by—the lack of secrecy,” said Tuck. “They talk very openly about what route they are taking. Some of them will sell their possessions to pay for their plane tickets.”

Though ISD tracked and profiled 300 Westerners via social media, they estimate that there could be as many as 1,000 such fighters.

“It’s not a huge number of people,” said Tuck of the mostly male militants who often express some kind of moral obligation to help defeat the ISIS terrorist group. Many are veterans who served in Iraq and Afghanistan and want to see the job done. Tuck said though they have no government-sanctioned leave to engage in combat, officials tend to look the other way when they return home.

“They’re not considered a danger—they are fighting on the same side as a lot of governments,” he said. “They don’t pose that same risk that returning fighters for ISIS do—it’s kind of swept under the rug.”

Though ISD spent months researching and profiling individuals, many can be found with an online search in minutes. Western anti-ISIS fighters and their supporters are vocal on Facebook and Twitter, and a number of groups and individuals openly state their intention to fight.

Macer Gifford, a U.K. citizen whose Twitter profile shows him fighting alongside the Kurdish Defense Forces, openly states his affiliation. He is a self-described “human rights activist and anti-ISIS campaigner.”

Gifford often posts links to interviews he’s done with international media and updates on issues related to fighters he calls “international volunteers.” One recent tweet lamented Turkey’s declaration to reporters that Brits caught fighting with YPG would be deemed “terrorists.”

“Turkey threatens International Volunteers and labels us terrorists,” wrote Gifford in a tweet. “We believe in democracy & fight ISIS. Madness!”

Gifford, like many profiled in the ISD report, expresses a belief in the moral responsibility to put his own boots on the ground. Government backing seems irrelevant.

“You use the word meddle, I use internationalist, humanitarian & solidarity,” Gifford wrote in response to a comment from a Twitter user that he and others like him should stay home. “Bad things happen when the good do nothin [sic].”

Gifford did not respond to a request for an interview, though he did follow back on Twitter.

The reality of returning home is in sharp contrast to the romantic draw of fighting an enemy most of the world is united against.

ISD’s Tuck and others warn that there is the possibility of suffering from the lifelong aftermath of such a decision, even if authorities are willing to let it slide.

Michael Blais is a veteran of The Royal Canadian Regiment and the president and founder of Canadian Veterans Advocacy. The group works for the health care rights of Canadian veterans. Blais said that he has personally talked with several vets who were thinking about going to fight ISIS. He said he doesn’t know if any of them followed through with it, though he worries about the long-term impact.

“I had to warn them and say, ‘What if you experience combat and a catastrophic event happens to you?'” he recounted. “You have to realize that the Canadian field hospital is not a helicopter ride away. There won’t be somebody to take care of them for the rest of their life.”

And if there are injuries that require ongoing care, it could be even worse. That carries psychological and emotional risks.

“Combat is combat, war is trauma,” said Blais. “There is a good chance for physical and mental injury.” He added that a Canadian veterans administration hospital would question—and likely deny care for—any such injury incurred in unsanctioned fighting against ISIS.

Though Blais said the issue of Western anti-ISIS fighters is barely on the radar of the Canadian public, the memory of the past decade’s combat is still raw. For some vets, that memory is the very thing that motivates them to return to Iraq or go to Syria: They want to finish the job.

“The Canadian experience in Afghanistan for Canada was very horrific,” he said. “We haven’t been to war like that since Korea. Those who were released really believe in the mission.”