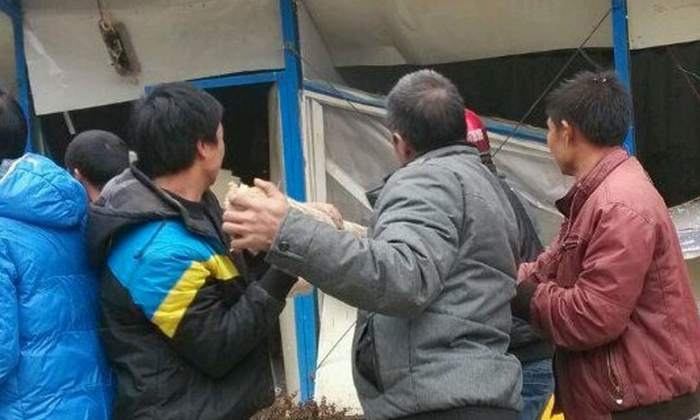 Four villagers use wooden poles to smash the office building of the Nanshan Power Plant near the Weijiang River in Guilin City in southern China's Guangxi Province, on Nov. 18, 2013. (tieba.baidu.com)
China

On Nov. 18, more than a hundred villagers from the Weijiang River Township smashed the offices, computers, and dorms of the Nanshan Power Plant, after learning that the project is going forward despite local residents’ objections, according to the Chinese Jasmine Revolution website, a website founded by pro-democracy activists that reports on activities relating to human rights in China.

15,000 residents living downstream along the Weijiang River in Guilin City in southern China’s Guangxi Province have struggled to stop the power plant project for more than 11 years, since 2002 when the project was first approved.

They say their worries about the power plant’s impact on the local environment and their ability to make a living have been ignored by local governments, and their appeals and protests have not been reported on by Chinese news outlets.

Reports on the violence at the Nanshan Power Plant gave different estimates of the size of the crowd that took part. One resident said there were 400-500 local villagers involved.

“Our purpose in going there [Nanshan Power Plant] was to convince them not to start the project, and to remove the equipment until we can reach an agreement,” a local villager surnamed Yang told Epoch Times in a phone interview. “But no responsible person wanted to come out and negotiate with us. Villagers were very angry at not having the right to protect their ability to make a living.”

Some took to the Internet saying that smashing the power plant was the only way to seek a solution, after having exhausted all regular methods and receiving no satisfactory response.

“What else can we do to stop them other than smash their building?” posted someone with the pen name Naiwa Dadi who identified him or herself as a local resident. “Is there any official at any level who has spoken up for us? The local officials quietly agreed to launch the power plant project because they were bribed.”

“I hope this incident can raise awareness. Only if the media reports on this do we have a chance to stop them.” Naiwa Dadi added.

To the surprise of the villagers, they found 24 homemade maces—metal sticks with many big sharp nails sticking out at one end—hidden under beds in the staff dorm at the power plant base.

Those maces infuriated the villagers, who believe these weapons were prepared to put them down.

“We found many weapons in their staff dorm,” villager Yang said. “It seems they are prepared to deal with us. People were very angry and smashed their dorm as well.”

“They prepared that many vicious weapons! Those construction workers are bandits and triads!” Netizen yzy5122262 remarked.

12 villagers’ committees from the Weijiang River basin wrote an open letter in December 2010, urging the power plant project be stopped.

The open letter indicates 15,000 residents have farmed the Weijiang River basin area for generations, and the river is their major water source for agriculture and everyday life. People there call the Weijiang River “Mother River,” according to local residents.

The planned Nanshan Power Plant and dam will form a reservoir, and the local residents say they will be cut off from the river.

According to the open letter, when local officials approved the project they said, “There are not many people living near the Weijiang River. Therefore, building a reservoir will not have much impact.” The letter called this a “lie” and said the statement greatly angered local residents.

The letter said: “We beg all levels of party committees and governments: don’t sacrifice the environment and people’s way of life for predatory economic growth! Don’t do such wicked things that sacrifice the lives of our descendants!”

With report by Gu Qinger