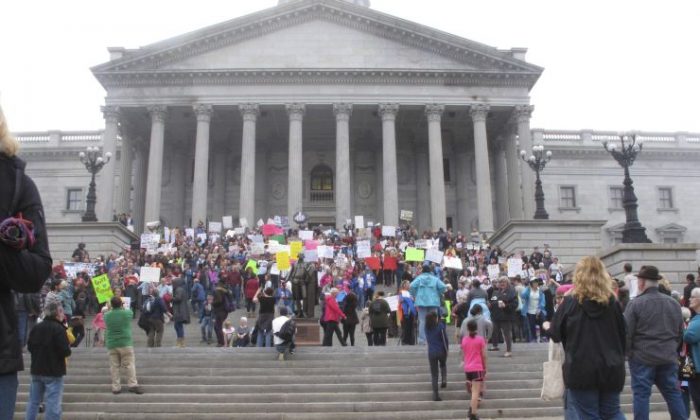 Thousands of women gather for the Stand Up Rally for women and minority rights on Saturday, Jan. 21, 2017, at the Statehouse in Columbia, S.C. Similar rallies were being held across the country to protest President Donald Trump and his administration. (AP Photo/Jeffrey Collins)
US

Hundreds of Thousands of Women Protest Against Trump

Wearing pink, pointy-eared hats to mock the new president, hundreds of thousands of women took to the streets in the nation’s capital and cities around the world Saturday to send Donald Trump an emphatic message that they won’t let his agenda go unchallenged over the next four years.

“We march today for the moral core of this nation, against which our new president is waging a war,” actress America Ferrera told the Washington crowd. “Our dignity, our character, our rights have all been under attack, and a platform of hate and division assumed power yesterday. But the president is not America. … We are America, and we are here to stay.”

The turnout in the capital was so big that crowds packed the entire march route, preventing organizers from leading a formal trek toward the White House. Likewise, in Chicago, organizers canceled the march portion of their event for safety reasons after the overflow crowd reached an estimated 150,000.

The women brandished signs with slogans such as “Women won’t back down” and “Less fear more love” and decried Trump’s stand on such issues as abortion, health care, gay rights, diversity and climate change. Their message reverberated at demonstrations around the globe, from New York, Philadelphia, Chicago and Los Angeles to Paris, Berlin, London, Prague, Sydney and beyond.

Boston professor Garland Waller, 66, part of the Washington mobilization, said she was “devastated” after the election and had to take action. “I don’t know what to do to make a difference anymore, and this feels like a first step,” she said.

Saskia Coenen Snyder, a teacher at the University of South Carolina who came to a rally in Columbia, said: “I’m not sure we could have picked a more irresponsible, misogynistic and dangerous man to be president.”

Officials said the crowd in Washington could be more than half a million people, more than double expectations. The event appeared to have attracted more people than Trump’s inauguration on Friday, based on figures from transportation officials.

More than 600 “sister marches” were planned around the world, and plenty of men were part of the tableau, too. Organizers estimated 3 million people would march worldwide.

Seventy-one-year-old Allan Parachini, who traveled from Hawaii to the Washington march, called it “the most impressive crowd I’ve seen since Woodstock.”

Retired teacher Linda Lastella, 69, who came to Washington from Metuchen, New Jersey, said she had never marched before but felt the need to speak out when “many nations are experiencing this same kind of pullback and hateful, hateful attitudes.”

“They thought they could bury us. They didn’t know we were seeds.” — Mexican proverb #womensmarch pic.twitter.com/yxd05BWklu

“It just seemed like we needed to make a very firm stand of where we were,” she said.

As the demonstrators rallied alongside the National Mall, Trump opened his first full day as president by attending a prayer service at the Washington National Cathedral, a tradition for the day after inauguration, and later visited the CIA. As he traveled around town, his motorcade passed large groups of protesters that would have been hard to miss.

Marlita Gogan, who came to Washington from Houston for the inauguration, said police advised her family not to wear their “Make America Great Again Hats” as they walked through crowds of protesters while playing tourist on Saturday.

“I think it’s very oppressive,” she said of the march atmosphere. “They can have their day, but I don’t get it.”

On the streets, feminist leader Gloria Steinem described the worldwide mobilization as “the upside of the downside: This is an outpouring of energy and democracy like I have never seen in my very long life.”

“Sometimes we must put our bodies where our beliefs are,” she told the crowd, labeling Trump an “impossible president.”

Hillary Clinton, who lost to Trump, took to Twitter to thank the participants for “standing, speaking and marching for our values.”

The marches displayed a level of enthusiasm that Clinton herself was largely unable to generate during her campaign against Trump, when she won the popular vote but he outdistanced her in the electoral vote.

At rallies around the world, many participants wore hand-knit hat — a message of female empowerment aimed squarely at Trump’s crude boast.

The marches were a magnet for A-list celebrities, unlike Trump’s inauguration, which had a deficit of top performers.

Cher, in the nation’s capital, said Trump’s ascendance has people “more frightened maybe than they’re ever been.” In Park City, Utah, it was Charlize Theron leading demonstrators in a chant of “Love, not hate, makes America great.” In New York, actresses Helen Mirren and Cynthia Nixon and Whoopi Goldberg joined a crowd of protesters marching to Trump’s local home.

In Paris, thousands rallied in the Eiffel Tower neighborhood in a joyful atmosphere, singing and carrying posters reading “We have our eyes on you Mr. Trump” and “With our sisters in Washington.” Hundreds gathered in Prague’s Wenceslas Square in freezing weather, mockingly waving portraits of Trump and Russia’s Vladimir Putin.

“We are worried about the way some politicians talk, especially during the American elections,” said organizer Johanna Nejedlova.

In Sydney, thousands of Australians gathered in solidarity in Hyde Park. One organizer said hatred, bigotry and racism are not only America’s problems.

The rallies were a peaceful counterpoint to the window-smashing unrest that unfolded on Friday when self-described anarchists tried to disrupt the inauguration. Police used pepper spray and stun grenades against demonstrators. More than 200 people were arrested.