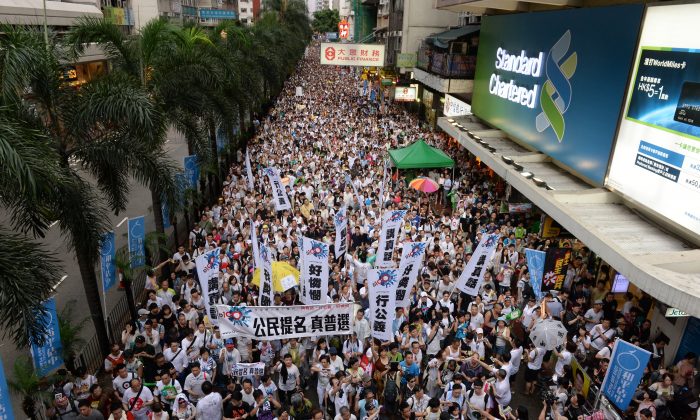 A mass of protesters march through Hong Kong's streets in support of universal suffrage on July 1. The march has become a tradition since 2003, when communist authorities in China attempted to pass a controversial anti-sedition law. (Song Xianglong/Epoch Times)
China

Hundreds of Thousands March for Democracy in Hong Kong

HONG KONG—A sea of protesters spilled through the streets of Hong Kong in a march on July 1, demanding their civil rights, the ability to elect their own representatives, and above all, freedom from the meddling of the Chinese Communist Party, which looms ever more menacingly just across the border.

Notably, the July 1 march comes this year just days after the conclusion of an unofficial referendum in which nearly 800,000 Hong Kong citizens expressed their wishes for universal suffrage—one person, one vote, and the ability to elect candidates as well as the chief executive—rather than the current process managed from Beijing, where the Party hand picks candidates it considers safe.

The July 1 march this year rivals in number the turnout in 2003 and 2004, when over 500,000 in consecutive years protested against Beijing’s attempt to implement an anti-subversion law, called Article 23, which would have severely clamped down on civil rights in the quasi-autonomous city-state.

Hong Kong, previously a British colony, has been organized as a Special Administrative Region of the People’s Republic of China since 1997, when it was promised a high degree of autonomy and no changes to its political system for at least 50 years.

Since 2003, however, Chinese communist infiltration, agitation, and intimidation has sought to roll back some of the freedoms that Hong Kong residents have long been accustomed to, with the pressure from Beijing intensifying in the last few years.

The Chinese Communist Party’s Office for Foreign Propaganda, also known as the State Council Information Office, recently published a white paper in which it made clear that Hong Kong’s autonomy is beholden to the central Party leadership, and is not sovereign.

Hong Kong residents interpreted the white paper as a threat, and their scramble to defend their rights bolstered numbers in the recent referendum and march.

Groups that had been milling around since the morning left Victoria Park in the center of Hong Kong at 3:30 p.m. for their tour through the central business district. Six soccer fields of people waited as the march filed out, even though heavy rains, which would return intermittently, began half an hour after the start. Four hours after the first contingent took off, the last group of protesters left Victoria Park.

Hong Kong’s Civil Human Rights Front, the march’s organizer, said that its conservative calculation was that 510,000 people joined the march this year, which would make it the largest since 2003 and 2004.

Journalists who covered both the 2003 and 2004 marches and yesterday’s march said far more people turned out this year. The online news website Boxun estimated the number of participants as 1 million. The population of Hong Kong is roughly 7 million.

Protesters yelled slogans and held banners stating, “We choose our own government,” “Leung Chun-ying step down,” “Universal Suffrage Go! Selection No!” and “Say No to PRC Fascism”

A number of mainland Chinese also marched in the parade this year. Wang Yanfang, wife of Chinese rights lawyer Tang Jingling, who was arrested last month for “subversion of state power,” deliberately traveled to Hong Kong to participate in the parade, according to Radio Free Asia. Along with Wang, over 10 relatives and activist friends joined the parade.

An Epoch Times reporter encountered several petitioners from Beijing who had come to protest against communist authorities, plus over a dozen residents of Macau, another Special Administration Region that is semi-autonomous from Beijing.

Su Jiahao, a member of the civil group “Macau Conscience,” told Epoch Times that they came to “learn the democratic spirit” from Hong Kong. “I think it’s very meaningful, the trend of democracy and freedom, telling the Communist Party that we’re not afraid,” Su said.

Domestic Chinese media, tightly controlled by propaganda authorities, especially on politically sensitive topics such as democratic protest in Hong Kong, has, with the exception of a small smattering of superficial reports, kept largely quiet about the mass parade.

Search results on Baidu, a major search engine in China, were stacked with negative reports about the protest, calling it a “farce,” while playing up the efforts of those in Hong Kong that oppose taking action against Beijing attempts at enhanced control. The only report about the march, a translated article by Reuters, has been deleted.

Despite the official blackout, many Chinese Internet users shared their enthusiasm over the protest on social media. “Congratulations Hong Kong” was a common refrain. On Weibo.com, the Twitter-like social media service, the posts were deleted—but they could be viewed on Free Weibo, an overseas website which collates censored posts.

Some mainlanders attempted to extend their support for Hong Kong by promoting an “Occupy Shenzhen” movement. Shenzhen, in mainland China, directly abuts Hong Kong on the border.

An announcement online said: “We hope mainland Chinese people who are dedicated to promote democratic transition in China, rights activists, and supporters of Hong Kong universal suffrage, will please occupy the civic square and the spaces near government buildings in Shenzhen … to express support for Hong Kong people.”

But attempts to organize actual street protests in China are often quickly, and sometimes violently, squelched by the police.

Radio Free Asia reports that when around a dozen protesters arrived at the central square in Shenzhen at 10 a.m. on July 1, they were set upon by a battalion of plainclothes policemen before they could raise their banners.

With reporting by Lin Yi in Hong Kong.