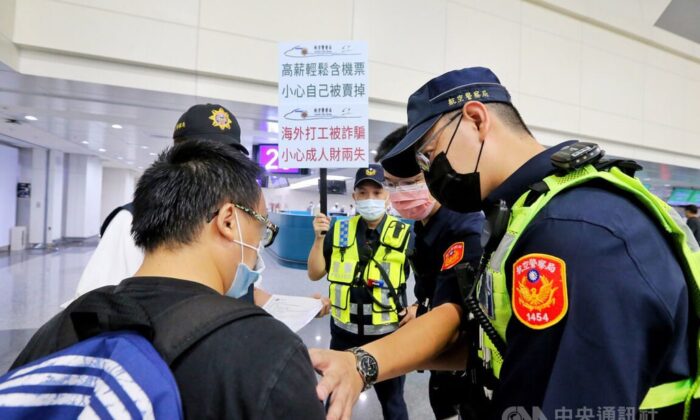 Policemen talk a passenger out of boarding a flight to Cambodia under a government campaign to tackle human trafficking at Taoyuan International Airport, Taiwan, on Aug. 1, 2022. (Courtesy of CNA)
Asia & Pacific

Hundreds of Taiwanese citizens are being held captive in Cambodia and forced to work in telecom scam networks run by human trafficking organizations, according to Taiwan authorities.

Furthermore, the rise in crime in Sihanoukville, a coastal city in Cambodia, has reportedly been linked to China’s Belt and Road Initiative.

Taiwan’s National Police Agency (NPA) said in early August that based on flight records, nearly 5,000 citizens have been recorded traveling to Cambodia and have yet to return. On Aug. 21, authorities had identified at least 370 of them being held against their will, adding that the actual number of victims could be more than 2,000.

The NPA revealed that about 1,000 Taiwanese traveled to Cambodia per month since the start of this year, but on average, only about 100 returned home each month.

The Reporter, an independent non-profit Taiwan-based digital media, interviewed a victim named Pipi (pseudonym), a 24-year-old Taiwanese woman who was held captive in Cambodia for seven days. She described the incident as her worst living nightmare.

According to the report, Pipi worked in the medical aesthetic industry and as a fitness coach. However, she lost her job during the COVID-19 pandemic.

While traveling abroad at the end of June, a recruiter on social media introduced her to a high-paying job in Cambodia. She said the intermediary was a fellow Taiwanese who seemed trustworthy.

However, things took a drastic turn when Pipi arrived in Cambodia. Her passport was immediately confiscated. Afterward, she was taken to Sihanoukville, where the telecom scam networks are located.

“They told me I have been sold. Then they asked me to deceive the next person. And if I don’t do it, they would beat me or sell me to another company,” Pipi said in the interview.

When Pipi refused to cooperate, she was given electric shocks and later sold to a second scam company. Within one week, she had been resold four times to different companies. During that time, she was allegedly abused, detained, electrocuted, and sexually assaulted multiple times.

After repeated abuse, Pipi had become unable to speak when she was sold to the fourth company. However, the traffickers forgot to confiscate her passport and belongings while preparing to sell her to a fifth company.

Pipi was then able to send an SOS message to a Taiwanese YouTuber via a mobile device while the traffickers were distracted. And through the help of transnational civil organizations, Pipi was rescued after the governor of Sihanoukville was made aware of the situation and instructed local police to assist.

Recently, human trafficking cases like Pipi have become the front page news in Taiwan as the police force has launched major operations to rescue its citizens who were tricked into working at so-called lucrative jobs in Cambodia.

However, Taiwan’s rescue efforts have been difficult to carry out due to the island’s lack of diplomatic presence in Cambodia, as the country does not have formal diplomatic ties with Taiwan. In contrast, the Cambodian government and Beijing have a so-called “ironclad friendship,” in which the two nations cooperate closely and only recognize Taiwan as a breakaway province from China.

On Aug. 19, the Chinese Embassy in Cambodia said it would assist “Taiwan compatriots” who it claimed were Chinese citizens. However, Taiwan’s Ministry of Foreign Affairs responded that it would “never outsource [consular assistance] to another country.”

They were initially offered jobs as clerks and call-center agents but later were forced to work for online scam companies for $500 per month or not paid at all. Workers were subjected to heavy fines if they failed to meet quotas or were sold to another company if they could not provide value.

“They were subjected to physical violence. The conditions are similar to slavery,” she said, according to Benar News.

One of the victims, who spoke to the news outlet on the condition of anonymity, said that workers were “beaten and given electric shocks” if they didn’t fulfill their quotas and had their passports burned by the employers.

In February, Reuters reported on a Chinese national who claimed to have been victimized by a fraudulent internet job post. He was trafficked to Sihanoukville by a criminal gang and coerced into working for numerous telemarketing fraud schemes.

His captors began extracting blood from him after he refused to work, which put his life in danger. The Chinese Embassy in Cambodia later revealed his surname as Li and confirmed parts of the report.

There were also multiple allegations of organ harvesting among human trafficking victims in Cambodia.

To get more people to participate in the scam, these cyber fraudsters advertise their recruitment needs to local gangs or criminal networks, claiming they will pay $20,000 to $30,000 per person. Many intermediaries find ways to acquire people through deception, kidnapping, and controlling personal freedom and then sell them out. They primarily target those who can speak Mandarin, according to Jimu News.

Citizens of China, Taiwan, Hong Kong, and ethnic Chinese from South Asian countries have all become the primary targets for human traffickers in Cambodia.

According to the report, the aforementioned Pipi was sold firsthand for $25,000 and resold three times in a similar price range, reportedly a much higher price compared to other non-Chinese speaking victims.

Various media sources suggest that China’s Belt and Road Initiative (BRI, also known as “One Belt, One Road”) has fostered the growing number of Chinese fraud cases in Cambodia in recent years.

The following October that year, Sihanoukville’s special economic zone was established to model Shenzhen, one of the wealthiest cities in China, bordering Hong Kong to the south.

Since China incorporated Cambodia into its BRI in 2016, Sihanoukville quickly became a gambling hotspot for the Chinese.

There were more than 200 direct flights between China and Cambodia per week starting in 2017. During its peak, the number of Chinese in Sihanoukville had reached 500,000, according to the Chinese online media portal Sina.

Chinese-run casinos emerged throughout Sihanoukville, and internet gambling has also become prevalent as it doesn’t have regional or national restrictions. Many internet gambling developers have set up their businesses in the city’s special economic zone, operating various gambling sites and gaining profits worldwide.

Fueled by the gambling industry, Sihanoukville saw a large inflow of capital in just a short time.

Chinese restaurants, supermarkets, hotels, KTVs, and other Chinese-language service industries sprung up, followed by an influx of Chinese real estate developers, which heated up the local property market.

The gambling industry promoted by China’s BRI may have produced an apparent economic boom in Cambodia, but it inevitably brought a sharp rise in violent crime.

An op-ed published on Chinese social media Tencent described the situation in Cambodia: “The gambling industry can give birth to a multimillionaire in a minute or leave a rich second generation penniless: Discrepancy between heaven and hell makes it easy to trigger a person’s propensity for violence.”

Every casino was supported by organized criminal groups from China, Hong Kong, and Taiwan, as well as the shares of Cambodian police and government officials. Cambodian gendarmes also worked part-time as security guards and drivers for the venues.

Worsened by gambling, the growing disparity between the rich and the poor has led to violent crimes in the city, such as kidnappings, shootings, drug trafficking, prostitution, human trafficking, and gang warfare. In addition, transnational money laundering and telecom fraud are also rampant.

On Aug. 18, 2019, Cambodian Prime Minister Hun Sen issued a ban on gambling, which went into effect on Jan. 1, 2020. The decree states that online gambling and arcade gambling in Cambodia are prohibited in order to maintain security and public order.

According to the French newspaper Le Monde, the Chinese Communist Party (CCP) pressured the Cambodian government into making the move as it realized that online gambling had become a channel for money laundering, leading to a massive outflow of Chinese capital.

Following the ban on gambling, various service businesses in Sihanoukville closed down, with a wave of real estate developers, investors, and capital withdrawing instantly from the city.

Cambodia’s English-language media Khmer Times reported on Jan. 1, 2020, that there were 447,000 Chinese who had left the country, including long-term visa holders, citing data from the Cambodian Immigration Department.