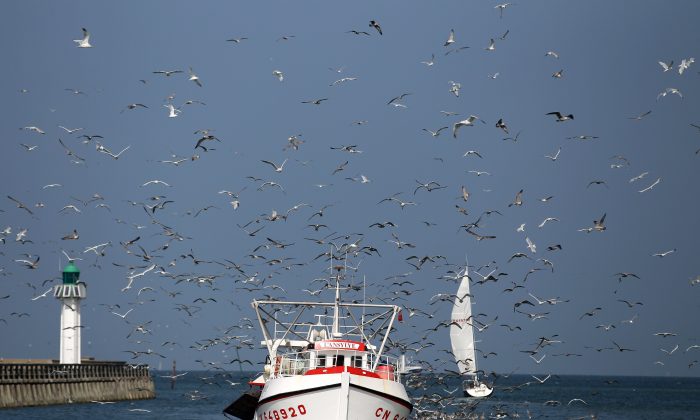 Better use of the tech we have could substantially improve search and rescue efforts.(Triballeau/AFP/Getty Images)
Tech

Hundreds of Ships Go Missing Each Year, but We Have the Technology to Find Them

The seas are vast. And they claim vessels in significant numbers. The yachts Cheeki Rafiki, Niña, Munetra, Tenacious are just some of the more high-profile names on a list of lost or capsized vessels which grows by hundreds each year.

Yet it took the disappearance of flight MH370, now declared lost with no survivors, to demonstrate how difficult it can be to find something in the open ocean. As the search continued, incredulity grew: exactly how, in the 21st century, is it possible to lose a 64-metre aircraft?

There are great unknowns at sea: planes and boats go missing. Illegal fishing and piracy are easy to conduct – and small vessels can smuggle powerful weapons and dangerous individuals. The technology to improve this situation already exists, we just need to make better use of it.

The View From Above

Satellites provide the vantage point necessary to monitor large areas of ocean. Spacecraft carrying synthetic aperture radar (SAR) can provide high-quality images with resolution down to a metre, regardless of the weather. But the relatively small number of spacecraft equipped with SAR, and the dawn-to-dusk orbits which most occupy, also limit the times of day when they can provide coverage.

To offer comprehensive monitoring at sea, we need to bring together different types of imaging, including radar and photographic images in the human-visible wavelength. This is often overlooked for maritime purposes due to the effects of cloud, rain, and darkness that limit its use. But there are enough satellites with the capability that could provide excellent coverage.

The two key requirements for effective monitoring are high spatial resolution (good detail) and a large field of view (wide area). One tends to come at the expense of the other, so that a device – whether it is a camera, satellite or radar – capable of detecting small vessels will usually only be able to scan an area a few tens of kilometres wide, making it both unlikely that the search area of interest has been recorded and rendering subsequent searches very slow.

But the situation is changing. The number of imagers is growing rapidly. In our recently published study, we identified 54 satellites carrying 85 sensors which offer useful resolution and could be accessed commercially (excluding military surveillance spacecraft). Companies such as PlanetLabs are in the process of launching many more.

While each satellite’s imaging device generates an image track only 10-100km across, the motion of the satellite as it orbits the Earth effectively “scans” that track so that the image is narrow in one dimension but circles the world in the other. With orbital periods of around 90 minutes, one satellite makes around 16 passes over the daylit hemisphere every day. The combined imaging work of all these satellites now make a significant contribution to our awareness of maritime traffic.

Imagery used in search-and-rescue operations is usually taken after the target is lost. In the case of the Niña which disappeared off the coast of New Zealand, eight days elapsed between last radio contact and the alarm being raised. For MH370, the search area evolved over periods of weeks. In both cases, ocean currents carry evidence away from the accident site, while debris disperses and sinks, making it more difficult to identify by satellite.

It would be far better to have an archive of recent, regularly updated images so that the recent history of a location over a period of several days can be examined. This could offer evidence of the vessel’s course or state, or pick up on areas of fresh, concentrated debris.

Making the Best of What We Have

Satellites with visible wavelength cameras are generally used for gathering images of land. What if satellite operators could generate revenue by taking images of the oceans? The limited resources on satellites mean that it isn’t generally possible to constantly take images, to store that data and transmit it all in the next available contact with the ground (which may be some time after an image is acquired). As it is, it’s not possible to create a global maritime monitoring system of this kind without purpose-built spacecraft with bigger data storage and more frequent contact with ground stations to download it.

But it is possible to monitor high-priority areas of heavy traffic, protected fisheries and security-critical regions, with co-operation between operators of existing spacecraft (for which there are precedents such as George Clooney’s Satellite Sentinel Project, which uses satellites to gather evidence of atrocities and war crimes), and incentives, perhaps involving maritime insurance companies.

Retrieving hundreds of gigabytes of data a day from satellites requires a new approach to ground stations. One solution may be to “crowdsource”: to create a network of stations operated by small institutions, universities and individuals to spread the burden of downloading data and increasing the periods during which data can be recorded and transmitted.

There are groups working on automated vessel-detection algorithms – and crowdsourcing also has a role here, such as TomNod, for example, which asked members of the public to help inspect images online in the search for Niña. How much more effective could search and rescue be if the power of crowdsourcing was applied to each stage of data acquisition, storage and processing, combined with high-quality images taken around the time the vessel was lost?