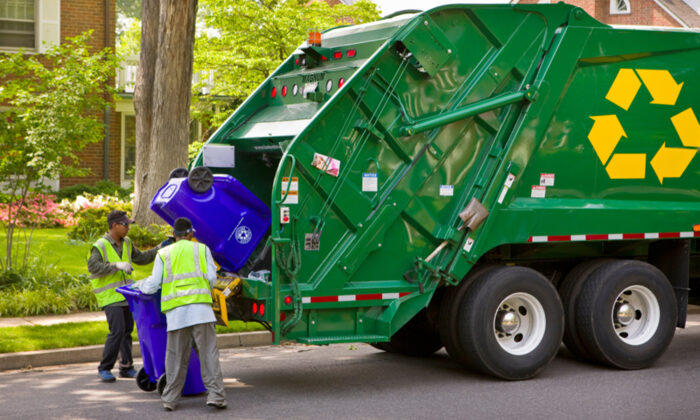 Drew Van Voorhis
Drew Van Voorhis is a California-based daily news reporter for The Epoch Times. He has been a journalist for four years, during which time he has broken several viral national news stories and has been interviewed for his work on both radio and internet shows.
View profile
Follow
and Vanessa Serna

A number of different cities in Orange County could have their trash service delayed after 400 sanitation workers have opted to strike, alleging unfair labor practices with employer Republic Services.

While the walkout is occurring at Republic Services facilities in Huntington Beach and Anaheim, other cities will also be impacted by having their trash services delayed.

Those cities include, Placentia, Garden Grove, Yorba Linda, Fullerton , and Fountain Valley, as well as Disneyland and major hotels, Adan Alvarez, spokesman for Teamsters Local 396, the union behind the strike, told The Epoch Times.

Officials from affected cities are encouraging residents to still take out their trash and recycling bins on scheduled pick up days, and if not serviced, leave them out for up to 48 hours, though it is not guaranteed they will be picked up.

Representatives of Huntington Beach have “been in communication with Republic Services and are monitoring the extent of service interruptions,” and will implement plans for alternate trash pickup and disposal if needed, according to the city’s website.

In Anaheim, nearly 50,000 households and businesses are impacted by the strike, according to city spokesman Mike Lyster.

That city began tracking negotiations between Republic Services management and its employees about a week ago prior to receiving a notice that there would be limited service for Dec. 9 and Dec. 10. It is unclear when regular services will proceed.

Residents and businesses near the State Route 57 and 55 freeways did not receive their scheduled trash pickup service Dec. 9, according to Lyster. Disruption of services was expected for those along the State Route 91 and 241 freeways on Dec. 10.

As services are limited, sites for pickup will be prioritized based on health risks, with hospitals and restaurants being at the top of the list, according to Lyster.

“Where there is an acute rapid accumulation of waste, there begins to present a very real health concern,” he told The Epoch Times.

Republic Services employees said they have been subject to unfair labor practices, including management making unilateral changes without bargaining and threatening employees who participate in union activity, according to a statement released Dec. 10 by Teamsters Local 396.

The union’s contract with Republic Services expired Sept. 30, and it voted to strike Nov. 23.

“They’re striking over unfair labor practices, including threats of retaliation, unfair treatment, and harassment,” Alvarez, the union spokesman said. “These workers currently have been bargaining for a contract, but more than anything, it’s about respect on the job, especially for essential workers.”

Alvarez said the strike could go on indefinitely, with its workers ready to be out for as long as it takes.

“Our workers want respect on the job, to be treated fairly like human beings,” he said. “Republic calls them heroes and then treats them like zeros.”

In a statement sent to The Epoch Times, Republic Services said negotiations are continuing.

“Republic respects the rights of our employees to engage in the collective bargaining process, and we continue to negotiate in good faith to achieve fair and competitive labor contracts,” the statement read.