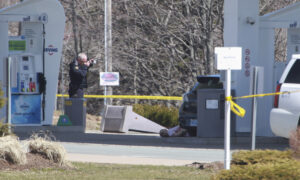 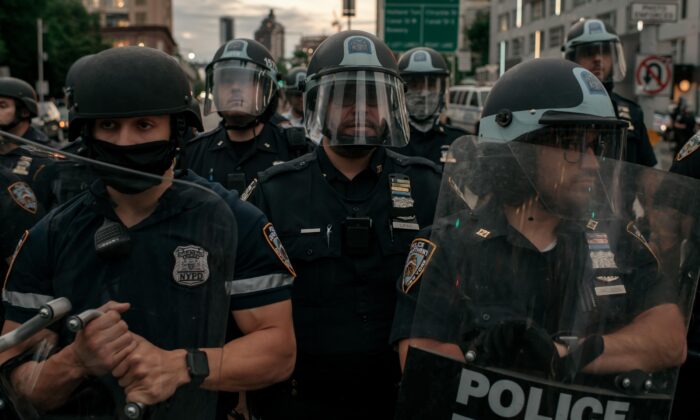 NYPD officers block the entrance of the Manhattan Bridge in New York City on June 2, 2020. (Scott Heins/Getty Images)
US News

More than 700 officers in 25 states were attacked, most of them likely injured, amid riots across the nation over the past few weeks, according to an incomplete tally by the Fraternal Order of Police (FOP), the country’s largest police union.

Most of the attacks involved rioters throwing bricks and rocks at officers, while officers were hit with bats or had Molotov cocktails thrown at them.

At least nine officers were shot, one fatally, and one stabbed and slashed, according to the tally. The motive in the fatal shooting remains unclear and may not be related to the riots.

The riots broke out after a black man, George Floyd, died after a white Minneapolis police officer knelt on his neck for several minutes while Floyd was handcuffed on the ground. Despite a quick arrest of the officer and pending second-degree murder charge, the incident sparked widespread protests that have, in many cases, turned violent, including many instances of arson and looting.

The FBI and the Department of Justice (DOJ) have placed the brunt of the blame for the violence on anarcho-communist group Antifa, though Attorney General William Barr said “there’s a witch’s brew of extremist groups that are trying to exploit this situation on all sides.”

At least 81 people have been charged with federal crimes as of June 12 since late May, when the protests began, The Epoch Times learned.

About 40 were arrested for committing acts of violence including using Molotov cocktails, setting fires, damaging property, and looting.

The most serious officer injury directly related to the protests may be the shooting of Shay Mikalonis, 29, on June 1 in Las Vegas. The bullet struck him in the back of the head, paralyzing him from neck down, his family said.

Edgar Samaniego, 20, was charged with attempted murder of Mikalonis along with other crimes. A police video shows him, “walking by, taking out a gun and firing … at officers,” a judge handling the case said at a June 5 hearing, according to the San Francisco Chronicle.

Two lawyers were charged with allegedly throwing a Molotov cocktail at an empty NYPD vehicle. They were indicted for use of explosives, arson, and other federal charges, and face a life sentence in prison.

The barrage of attacks is accompanied by demands by the protesters that police forces be defunded or disbanded completely.

“The men & women of #LawEnforcement will continue to put themselves in harms way for their communities despite the calls from virtue-signaling politicians to #DefundThePolice and those in the media who are hell-bent on vilifying our officers & smearing the entire profession,” the FOP said in a June 11 tweet.

Correction: A previous version of this article incorrectly stated the number of states where law enforcement officers were attacked, according to a tally by the Fraternal Order of Police. The correct number is 25.