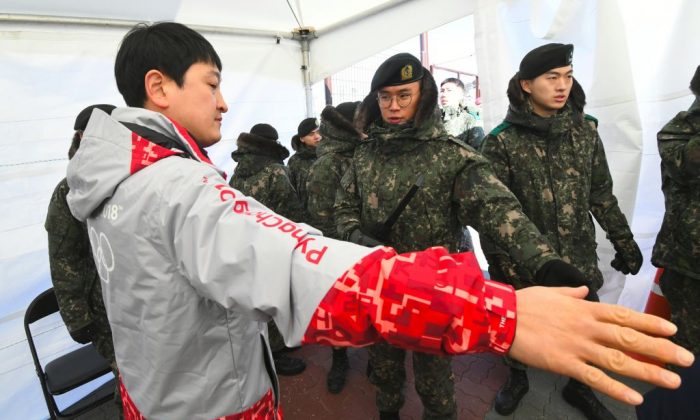 South Korean soldiers inspect a visitor at a security checkpoint as they replace security guards showing symptoms of the norovirus at the Gangneung Ice Arena in Gangneung ahead of the Pyeongchang 2018 Winter Olympic Games on Feb. 6, 2018. (Jung Yeon-Je/AFP/Getty Images)
Asia & Pacific

Hundreds of cases of norovirus infections have been confirmed during the Winter Olympics in the host city of Pyeongchang, as of Feb. 12.

The outbreak of the virus started last week.

Officials said 47 patients are currently quarantined while 147 have recovered and returned to work.

None of the patients are Olympic athletes, reported Yonhap.

According to the U.S. Centers for Disease Control and Prevention, “Norovirus is a very contagious virus that can infect anyone.”

The agency added, “You can get it from an infected person, contaminated food or water, or by touching contaminated surfaces. The virus causes your stomach or intestines or both to get inflamed. This leads you to have stomach pain, nausea, and diarrhea and to throw up. These symptoms can be serious for some people, especially young children and older adults.”

Previously, the outbreak caused 1,200 private security workers to be isolated in their rooms and each tested for the virus.

Christophe Dubi, Olympic Games executive director, told Reuters: “All areas are getting disinfected. They [organizers] will be extremely diligent to sanitize anything that came into contact with the persons. Very stringent measures are in place when it comes to food and beverage.”

The 2018 Winter Olympics is scheduled to run through Feb. 25.