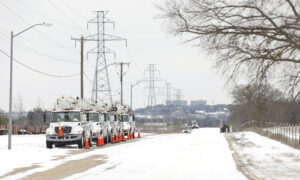 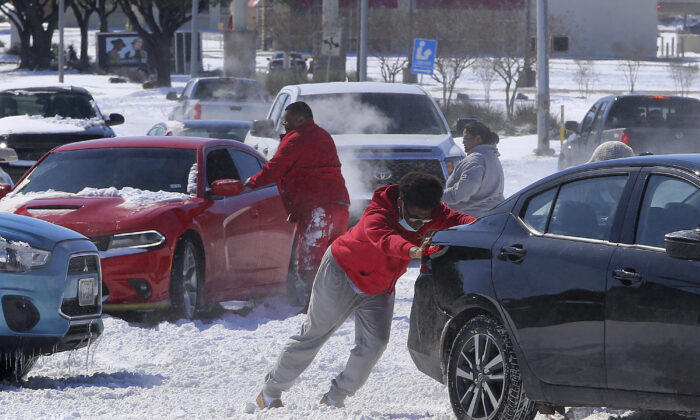 People push a car free after spinning out in the snow in Waco, Texas, on Feb. 15, 2021. (Jerry Larson/Waco Tribune-Herald via AP)
Texas

The winter storm and power outages in Texas have triggered numerous cases of carbon monoxide poisoning as some people used unconventional means to try and generate heat as temperatures plunged.

Firefighters in Harris County reportedly handled more than 300 cases of carbon monoxide poisoning in recent days. Judge Lina Hildago wrote that the number is “just the tip of the iceberg,” suggesting it was likely much higher.

“The truth of the matter is, this carbon monoxide poisoning is in many ways a disaster within a disaster,” Hidalgo said. “Much of these poisoning calls … they’re due to bringing grills into the house, turning cars on in garages, basically using outdoor equipment inside,” Hidalgo added. “You can use that equipment to stay warm, just don’t use it in your home.”

Incidents of carbon monoxide poisoning have risen in the last few days. Please remember NOT to bring any outdoor appliances (grills, etc.) inside, or run your car inside the garage. Be safe and stay warm! #wintersafety pic.twitter.com/Z18BQMY0kO

She wrote: “Carbon monoxide is DEADLY! We have had so many carbon monoxide incidents and calls in #HarrisCounty that we can not even track them all. SIGNS & Symptoms: headaches, nausea, dizziness. Grills and generators should be left outside away from windows, doors and vent openings.”

In Fort Worth, an official with the Cook Children’s Medical Center told NPR that the facility treated at least 13 patients on Monday night whose families were attempting to heat their houses with diesel- or propane-burning engines that aren’t designed to be used indoors.

“Carbon monoxide poisoning prevents your blood from being able to buy into oxygen,” Dr. Sam Selby, an emergency physician at Cook Children’s told the broadcaster. “You suffocate while you are still breathing.”

Dr. Samuel Prater, an emergency room physician at Memorial Hermann Texas Medical Center, said on Tuesday that people should not use grills or generators inside.

At present, some 447,000 Texas households were without power, down from around 2.7 million on Wednesday, according to poweroutage.com, a website that tracks outages. The Electric Reliability Council of Texas (ERCOT), a cooperative responsible for 90 percent of the state’s electricity, said on Thursday it made “significant progress” in restoring power. It did not provide detailed figures.