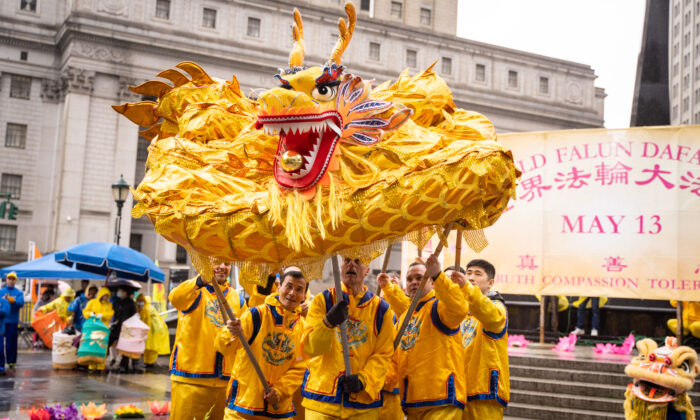 NEW YORK—The soaking rain and bitter wind would have been enough reason for anyone to stay indoors, but not for the hundreds who congregated at Lower Manhattan’s Foley Square on May 7.

They had a special reason for being there: to share a message of health, hope, and resilience ahead of World Falun Dafa Day.

The crowd began to gather as early as 8 a.m. and gradually grew over the next hour as individuals helped each other line up in neat rows surrounded by a large circle of colorful lotus flowers, their jackets of azure blue or bright yellow forming a marked contrast against the gloomy gray backdrop.

For about an hour, they stood together in peace and quiet, as hundreds of pairs of hands moved in unison in meditative exercises following the lead of traditional Chinese music, while members of the Tianguo marching band, also dressed in blue shirts, separated into another group for an energetic array of tunes that reverberated for blocks. Soon, the two groups joined again—as onlookers or performers—for another feast of music and dance.

The clue for the festivities, one of many that will unfold across the world in the following week, was on the apricot yellow banner right behind them. May 13 this year marks the 71st birthday of the founder of Falun Dafa, Li Hongzhi, who introduced the spiritual practice to the public in China 30 years ago on that day.

An estimated 70 million to 100 million people in China took up the practice over the following decade, choosing to live their lives guided by the belief’s three core principles of truthfulness, compassion, and tolerance, which have brought good health and inner peace to many followers.

The day has been celebrated worldwide since 2000 by adherents and supporters of Falun Dafa (also known as Falun Gong), except in China, where the communist regime initiated a severe eradication campaign targeting the faith in 1999.

The perseverance of those under the harsh suppression in China has been a source of inspiration for those overseas, attendees said.

“People that practice Falun Dafa are incredibly resilient, are enduring great hardship, considering they are being persecuted in China,” singer and songwriter Katy Mantyk told The Epoch Times.

“I have friends here in New York whose family back in China are still missing, being tortured or killed. They can’t go back home ever, and it’s so sad. To put up with a little bit of rain really seems like nothing compared to that.”

In New York, at least 69 federal and local officials have issued proclamations and awards to recognize the occasion, said Erping Zhang, a spokesperson for the New York-based Falun Dafa Information Center.

“Falun Dafa’s principles of truthfulness, compassion, and tolerance are now recognized around the world as the foundation of humanity, and we trust that the Chinese people will have the same freedom in the not distant future to follow this ancient spiritual path as everyone else,” he told The Epoch Times.

The anniversary brought Mantyk a feeling of nostalgia.

The New Zealand-born Mantyk discovered Falun Gong 18 years ago at the age of 23. She described the values the practice espouses as an “anchor” that has guided her through the ups and downs in life.

“They sound simple, but they encompass so much depth,” Mantyk said. “As long as I behave, think, or align my heart closer to truthfulness, compassion, and tolerance, the more harmonious the outcome always is.”

That appreciation provided the inspiration for her song called “Search No More” a decade ago as she was walking through the streets of New York; it was the song that set off her music career, she said. She performed the song onstage on May 7.

“I didn’t need to search anywhere for the answers of life because I found them,” she said. “I want to share that with the world as much as possible.”

It’s something special “to remember that I have Dafa for all these years, and I’m grateful for that,” she said. “I’m looking forward to many more.”

Two teenage sisters, Li Xiyuan and Li Meiyuan, each carried a wooden basket full of handcrafted lotus flower origami, which they handed out to passersby. The two, aged 16 and 14, respectively, had been there all morning.

They shared one plaid-patterned umbrella, their arms linked together as they spoke. The sleeves of their blue jackets, which weren’t waterproof, were wet and showed a deeper hue.

They were cold, they said, but they viewed the cold as an opportunity to test their resolve.

“If everyone succumbs to the rain or other outside factors, then no one would be here,” said the younger sister. The pair were happy to be able to pass out the origami flowers while sharing the principles of Falun Gong.

Chen Fayuan, 17, from upstate New York, performed two songs on the two-stringed erhu, a Chinese instrument, with her friends. One of the pieces, called “In the Same Boat Braving Wind and Rain,” was a song penned by fellow adherents to signify a strong will in the face of adversity.

Chen’s countenance saddened a little when she talked about her parents, whom she has heard little from since their arrest in Changsha, a city in southern China’s Hunan Province, in October 2020. She believes they both have been sentenced, but doesn’t know when, and doesn’t know how they’re doing.

Seeing her peers and their parents together sometimes made her anxious about her own situation, Chen said. But while practicing for the May 7 performance, the music gave her a feeling that she was also making a way in her own journey in life, which brought her solace.

In the music, somehow the loneliness and fear melted away, she told The Epoch Times. It felt like a “rebirth.”