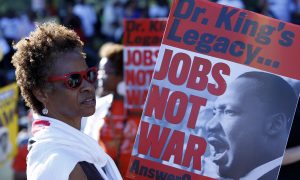 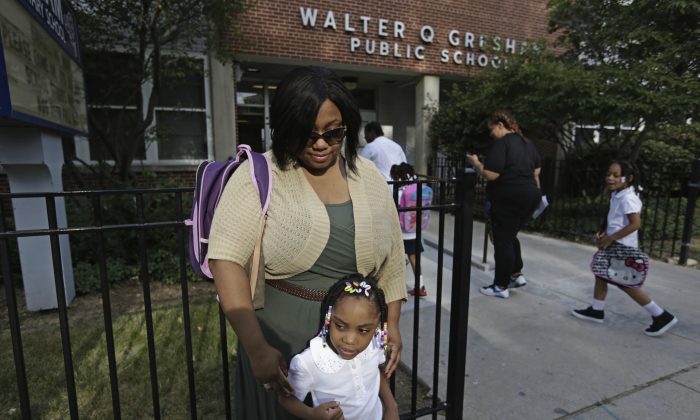 Jennifer Press stands outside on the first day of classes at Gresham Elementary, July 26, in Chicago. Thousands of students will walk to school along newly designated “Safe Passage” routes. (AP Photos/M. Spencer Green)
US

On the first day of school in Chicago, Ill., hundreds of newly hired guards watched over students as they walked to school. More than 50 schools in Chicago have been closed, and the closures may force students into unfamiliar and dangerous terrain.

Critics worried that students would have to cross gang boundaries traveling to schools farther from home.

Chicago Mayor Rahm Emanuel has betrayed the promises he made about improving education in the city, according to Jackson Potter, staff coordinator for the Chicago Teachers Union.

The expanded Safe Passage program is “putting safety and security ahead of the emotional well being of students.” The school system has hired guards, but there is a net loss of staff, counselors, psychologists, and the staff that would help students navigate violence in their lives, in his opinion.

To Potter, Safe Passage and the publicity given it on the first day of school is “meant to distract attention from the biggest budget cuts we’ve seen in a generation.”

Although federal and state funding has declined, the drastic cuts to Chicago schools are not necessary, according to Potter. It’s a matter of choice. The Tax Increment Financing (TIF) program subsidizes real estate moguls, corporations, and financiers, in his opinion, while teachers and students make sacrifices.

TIF is a special funding tool to put blighted properties back to productive use, usually in conjunction with private development projects, according to the city website.

Potter said that Emanuel could declare a surplus today if he ended the TIF program.

Annie Stovall walked with her 9-year-old granddaughter to her first day at Gresham Elementary School. Stovall said that she’s skeptical about whether the city’s Safe Passage show of force will last. She said to check back in five or six weeks to see how safe the students are then.

Concerned Chicago parents took time off work or recruited other family members to make sure children got to class safely as school opened Monday, Aug. 26.

An analysis of Chicago data shows that there have been more than 100 shootings and dozens of murders this year in and around areas newly marked as Safe Passage routes by the city.

Thousands of children from closed schools are using the 53 new routes to walk to and from their new schools Monday, sometimes crossing street-gang boundaries.

In its analysis, WBEZ-FM found that there have been 133 shootings and 38 murders near those Safe Passage routes in 2013.

Along the routes for the South Side’s Luke O’Toole Elementary School, there have been three murders through mid-August.

Safe Passage routes and programs positioning adults along those routes were in place previously for 35 high schools and 4 elementary schools. According to Chicago Public Schools, crime along those routes fell by 20 percent over two years.

The Safe Passage program “is ultimately a band aid,” said Potter. “When you have to deploy hundreds of people to walk children to school, it shows there is really something wrong—with housing, with jobs, with health care. You can’t just respond to that with police, but that’s the mayor’s response.”