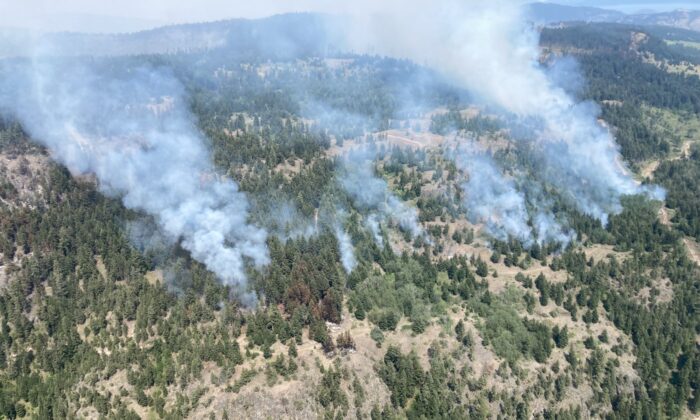 Hundreds of Lightning Strikes Hit BC as Severe Thunderstorms Roll Through

Severe thunderstorms have torn through British Columbia’s Interior, delivering hundreds of lightning strikes to areas already ranked at a high to extreme risk for wildfires.

The BC Wildfire Service website says 45 new fires have been recorded in the last two days, including one suspected lightning-caused blaze near Monte Lake, the same area where a massive wildfire destroyed homes last year.

The new fires remain small, but more lightning is in the forecast for areas of southern and southeastern B.C., such as Penticton, where a 67-square kilometre wildfire has forced evacuation orders and alerts.

The wildfire service has warned that gusty winds linked to thunderstorms can increase fire behaviour, but it says containment lines are stable on the southern and eastern flanks of the fire nearest to the communities of Keremeos and Olalla.

At the height of Thursday’s thunderstorms, Environment Canada says Kamloops recorded a wind gust of 82 kilometres per hour, while gusts in Merritt reached nearly 60 kilometres per hour and the city was drenched by more than 23 millimetres of rain, causing some localized flooding.

Thunderstorms on Wednesday also brought heavy rain to areas around Lytton, which was damaged by wildfires last year, causing mudslides that have covered the Trans-Canada Highway, closing the route between Lytton and Spences Bridge.