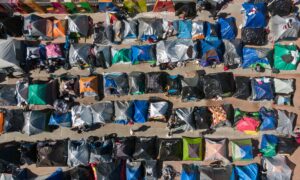 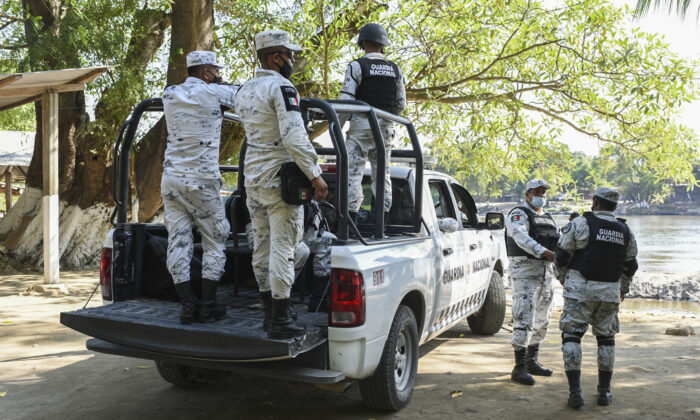 Members of the Mexican National Guard patrol on the banks of the Suchiate River in Ciudad Hidalgo, Chiapas state, Mexico, on Jan. 16, 2021 as a new migrant caravan is expected to get to the Mexican border with Guatemala. The Mexican government said it would not allow the "illegal entry" of any migrant caravans and has deployed 500 immigration officers to the border states of Chiapas and Tabasco. (ISAAC GUZMAN/AFP via Getty Images)
Americas

Hundreds of Illegal Immigrants Found in Trucks Near Mexico-Guatemala Border

Mexican authorities said on March 19 that hundreds of illegal immigrants, including unaccompanied minors, were discovered crammed in three tractor-trailer trucks near the Mexico-Guatemala border.

During routine checks, Mexican migration agents along with National Guard police found 329 Guatemalans and Hondurans, including 114 unaccompanied minors, in the vehicles.

The tractor-trailer trucks were stopped on a highway south of Tuxtla Gutierrez, the capital of Chiapas state, according to a statement from Mexico’s Interior Ministry.

The unaccompanied minors were given food and water, and were later transported to shelters run by the migration authority, while the adults were sent to to nearby offices to begin administrative processing, the Interior Ministry said.

It comes as Mexico launches an operation to crackdown on illegal crossings at its southern border with Guatemala, including monitoring entry points with drones, and stationing officers at parts of the border.

The rollout of measures to deter migrant smuggling is particularly aimed at people travelling with minors, and was announced a day after Mexico said it was barring entry for nonessential travel at the border to curb the transmission of COVID-19, the disease caused by the CCP (Chinese Communist Party) virus.

“The Mexican government will carry out … operations on the southern border to protect the rights and safety of migrant minors from several Central American nations who are used by criminal networks as a passport to reach northern Mexico,” Mexico’s National Immigration Institute (INM) said in a statement.

INM said that since January, 4,180 accompanied and unaccompanied minors, mainly from Central America, had been found in Mexico without sufficient travel documents.

The latest restrictions coincide with a spike in the number of illegal immigrants reaching the U.S border through Mexico.

The influx of illegal immigrants, including many minors, at the U.S.-Mexico border has reached new highs since the last crisis in 2019. The number of illegal crossings is skyrocketing as President Joe Biden begins implementing his plan, which he campaigned on, to roll back Trump-era immigration rules and policies aimed at curbing the flow of illegal immigration.

The U.S. Customs and Border Protection (CBP) this week announced a more than 100 percent month-over-month increase in February in two categories of illegal aliens—family units and unaccompanied minors.

Department of Homeland Security Secretary Alejandro Mayorkas said Sunday that although the southern border is closed, unaccompanied children who illegally enter the country won’t be expelled.