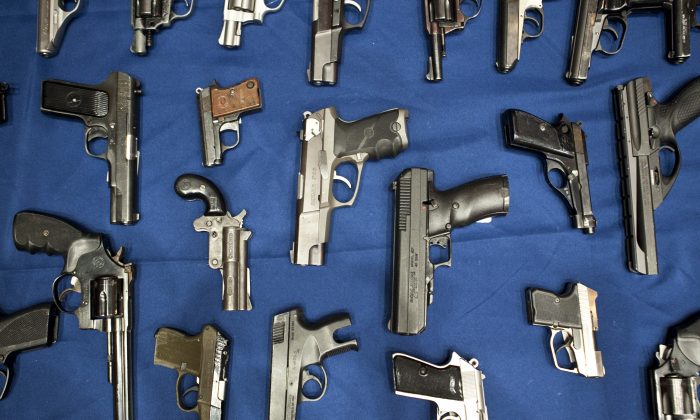 Hundreds of guns were hidden in car panels and doors as part of an international weapon-smuggling operation. These handguns are in a 2013 file photo. (Samira Bouaou/The Epoch Times)
Crime and Incidents

Hundreds of Guns Smuggled From Cleveland to Beirut in Used Cars, Indictment Says

Smugglers hid firearms inside used cars and then shipped them overseas, U.S. authorities said this week, revealing details of what they say was an international operation based in and near Cleveland, Ohio.

The gun-running operation allegedly sent hundreds of guns to Beirut, Lebanon, where they were resold at a profit, a news release from federal agencies said.

The documents do not say how much money may have changed hands in the scheme.

Interpol was involved in the arrest of one of the two suspects, Jean Youssef Issa, 48, earlier this month, more than six years after he and George Nakhle Ajaltouni, 47, formerly of North Olmsted, near Cleveland, were named as co-conspirators in a federal indictment.

That indictment was filed in 2016 but remained secret until a federal judge unsealed it this week, at law enforcement’s request.

Ajaltouni remains at large and police are seeking the public’s help to locate him. He is featured in an FBI Most Wanted poster.

Ajaltouni, who is said to use 10 aliases, was born in Lebanon and authorities believe he still lives there, but he may travel to Cyprus and France.

He may be with a fellow Lebanese national Nakhle “Mike” Nader, who is also wanted by the FBI on a separate income-tax-evasion indictment.

Nader is not accused of involvement in the alleged gun-smuggling scheme.

Indictments against all three men had remained under seal for several years while authorities searched for them.

But officials asked a federal judge to unseal the records as of July 25, 20 days after Issa’s arrest under an Interpol Red Notice, a worldwide request for law enforcement to find and “provisionally arrest” a suspect.

Court records do not say specifically where Issa was arrested, nor do they disclose where he was being held, or his current extradition status.

Daniel Ball, a spokesman for the U.S. Attorney’s Office in the Northern District of Ohio, said he could not provide additional information about Issa and had no photo of him.

In the recently unsealed indictment, Ajaltouni and Issa are charged with conspiracy to smuggle and illegally ship firearms, smuggling goods from the United States, unlawful delivery of firearms to a common carrier, and control of arms exports and imports.

Ajaltouni is also accused of a separate charge of unlicensed dealing in firearms.

The alleged conspiracy involved buying firearms from federal dealers, gun shows, and private sellers between May 2011 and September 2014.

The indictment said that he allegedly purchased as many as 20 guns at a single gun show, while the vehicles were mainly purchased from automobile auctions.

The vehicles were allegedly “used to store and conceal firearms inside the doors and body panels,” the news release said.

The indictment states that Issa traveled from Beirut to Cleveland to assist Ajaltouni to prepare the firearm-laden vehicles before the cars were loaded onto ships and transported to Beirut.

The indictment says dozens of guns were sometimes hidden within a single car; 93 weapons, mostly 9mm handguns, were allegedly concealed in a green 2006 Honda Odyssey.

At times, a shipped vehicle contained only one gun, the indictment shows.

Ajaltouni and Issa traveled between Cleveland and Beirut to ensure that the smuggled weapons arrived, authorities said.

Ajaltouni is also charged in a separate indictment with naturalization fraud. An indictment says that he became a U.S. citizen in 2009 but was not entitled to do so.

Neither the news release nor the 2018 indictment provides additional details.

The FBI asks anyone who knows the whereabouts of Ajaltouni or Nader to contact its tip line at 1-800-225-5324. Callers can remain anonymous.

Multiple agencies have been involved in the three men’s cases, which are being prosecuted by assistant U.S. attorneys Matthew Shepherd, Matthew Kall, and Robert Patton of the Northern District of Ohio.