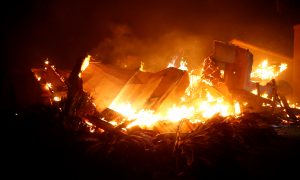 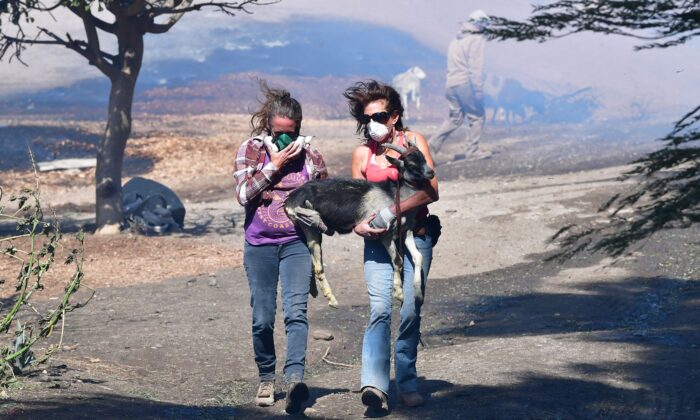 Robyn Phipps (L) and Laura Horvitz help rescue a goat from a ranch near the Ronald Reagan Presidential Library in Simi Valley during the Easy Fire in Simi Valley, Calif., on Oct. 30, 2019. (Frederic J. Brown/AFP via Getty Images)
Southern California

Hundreds of Goats Helped Save the Reagan Presidential Library

It used to be said of President Ronald Reagan that he could certainly get your goat.

In the present, the Reagan Presidential Library in Simi Valley, California, gets their goats—hundreds at a time visit the location every May. Both firefighters and library officials now credit them for helping save the facility from a recent raging fire.

The so-called Easy Fire, named for its origin on Easy Street in a residential area, began at 6:00 in the morning of Oct. 30. Driven by constant 40-mph Santa Ana winds, the blaze grew rapidly to consume 250 acres in less than 30 minutes. Within hours, it had devoured 1,300 acres, threatened 6,500 homes, and was rapidly moving up the hills toward the Presidential repository, according to Ventura County Fire Officials and Reagan Library spokesperson Melissa Giller.

“It was bad news for a few hours,” Giller told The Epoch Times. She arrived shortly after the fire began and watched anxiously as firefighters worked hard to secure the complex, battling flames from the ground and air.

Wildfires have threatened the 400-acre presidential library and museum complex in the past. This time, however, was the closest call yet, according to John Heubusch, Executive Director of the Reagan Presidential Foundation and Institute.

“What saved this library at this moment was a combination of hundreds of courageous front line firefighters, those brave helicopter pilots who defied powerful 80 mile-per-hour gusts to douse that entire canyon around us. Those hurricane force bursts drove enormous flames up to the edge of the library. Fortunately, we had prepared, like we do every year, with a wide swath fire break created naturally by hungry goats,” he said.

Of course the 260,000-square-foot museum is designed to protect it from fire, earthquake, and storms. The most important asset, the presidential papers, are actually stored in vault-like complexes, sealing them off from catastrophe.

Heubusch told The Epoch Times the fire came within 15 feet of one of the structures. At one point, about 50 or 60 fire trucks stood on the hilltop fighting back the fire and protecting the buildings. Flames were fought back by a hundreds of firefighters and water dropping aircraft.

In the aftermath, virtually everyone claimed the wide fire break created by the goats had saved the day.

Giller said: “The Ventura County Fire Department actually delivers hundreds of goats each May to eat all the brush that has grown up all around the perimeter of the library. The result is a wide fire break that lasts for many months.

“As the flames were racing up one hill, and all the brush had previously been cleared, it gave them room to beat back the fire.”

John Heubusch said the addition of hungry goats each spring to the 400-acre complex has also been a wonderful idea for other reasons.

“They are entertaining. Hundreds of people actually come each year to welcome the goats and photograph them. It is something of a tradition now,” he said.

The Reagan Library houses more than 60 million documents and 1.6 million photographs from the Reagan administration, according to the library’s website. A half-million feet of motion picture film, tens of thousands of audio and video tapes, and over 40,000 artifacts are also housed there.

The Air Force One, tail number 27000, which flew seven U.S. presidents, sits in a pavilion at the location with other presidential limousines and Secret Service SUVs. A full-size replica of the White House Oval Office is also located on the complex’s grounds.

Reagan and his wife, Nancy, are buried next to each other on a hillside at the library.

As of Nov. 2, the Easy Fire had consumed 1,806 acres and was 100 percent contained. Hundreds of buildings were previously threatened by the fire, and about 26,000 Ventura County residents were at times under evacuation orders.