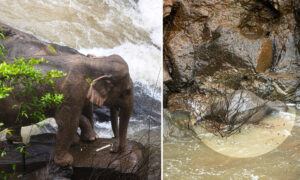 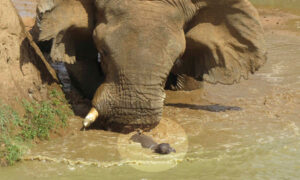 Hundreds of elephants in northern Botswana have mysteriously died over the past two months in what experts are describing as a “conservation disaster.”

Since early May, the carcasses of more than 350 elephants have been spotted in the Okavango Delta, and the cause of their deaths is unknown. Some 70 percent of the deaths were clustered around waterholes, local sources told The Guardian.

“This is a mass die-off on a level that hasn’t been seen in a very, very long time,” Dr. Niall McCann, director of conservation at UK-based charity National Park Rescue, told the news outlet. “Outside of drought, I don’t know of a die-off that has been this significant.”

The first deaths were reported at the start of May, when 169 elephant carcasses were spotted in the northwestern wetland area by local conversationists, who then alerted the government.

“This is totally unprecedented in terms of numbers of elephants dying in a single event unrelated to drought.”

The Botswana government has reportedly ruled out poaching, as the carcasses were found intact, suggested they were not poached.

Further investigations have also ruled out poisoning by humans or anthrax—a serious infectious disease—as possible causes of death. Anthrax was initially considered the most likely cause of the elephants’ deaths. Last year, more than 100 elephants died in the region because of a suspected anthrax outbreak.

Anthrax is a bacteria found naturally in soil and commonly affects domestic and wild animals when they breathe in or ingest spores in contaminated soil, plants, or water, according to the U.S. Centers for Disease Control and Prevention.

Local sources told The Guardian that some of the animals were spotted walking around in circles, which in some cases indicates neurological impairment.

“If you look at the carcasses, some of them have fallen straight on their face, indicating they died very quickly,” McCann said. “Others are obviously dying more slowly, like the ones that are wandering around. So it’s very difficult to say what this toxin is.”

Dr. Cyril Taolo, acting director for Botswana’s Department of Wildlife and National Parks, told The Guardian that samples have been sent off to laboratories for testing, and results are expected in the coming weeks.

Africa’s overall elephant population is declining due to poaching, but Botswana, home to almost a third of the continent’s elephants, has seen numbers grow to 130,000 from 80,000 in the late 1990s, owing to well-managed reserves.

However, elephants are seen as a growing nuisance by farmers, whose crops have been destroyed by animals roaming the southern African country.