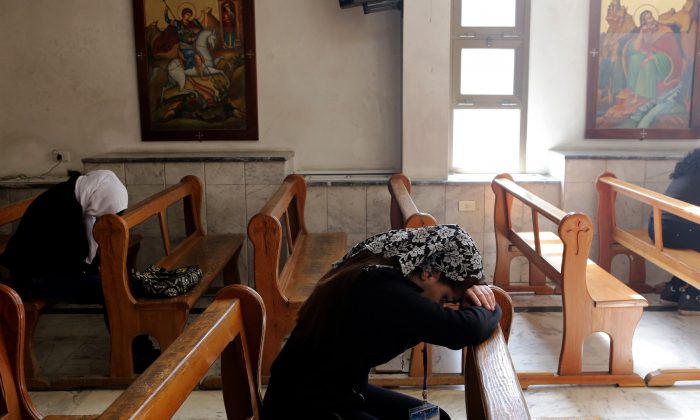 Displaced Assyrians, who had fled their hometowns due to ISIS attacks against their communities, at the Khalil Melkite Greek Catholic church in the Jaramana district on the outskirts of the capital Damascus on March 1, 2015. (LOUAI BESHARA/AFP/Getty Images)
Middle East

BEIRUT—The ISIS terrorist group on Monday released the last of some 230 Assyrian Christians kidnapped a year ago in Syria after the receiving millions of dollars in ransom, Christian officials said.

Younan Talia, of the Assyrian Democratic Organization, said that about 40 remaining Christian captives were released early Monday and are on their way to the northeastern town of Tal Tamr.

We paid large amounts of money, millions of dollars.

Younan said the release came after mediation led by a top Assyrian priest in northern Syria.

The extremists captured the Assyrians, members of an ancient Christian sect, last February after overrunning several communities on the southern bank of the Khabur River in northeastern Hassakeh province.

Kidnapping for ransom is a main source of income for the terrorists. In November, ISIS said it killed a Norwegian and a Chinese captive after demanding ransom for their release two months earlier.

Talia said ISIS demanded a ransom of $18 million for the Assyrian Christians. He said the figure was later lowered following negotiations. He said he did not know the final amount.

A Syrian Christian figure said the worldwide Assyrian community launched a campaign for the captives’ release shortly after they were abducted. He said a bank account was opened in the northern Iraqi city of Irbil and donations began to flow in from around the world.

“We paid large amounts of money, millions of dollars, but not $18 million,” said the man, who requested anonymity because he was not authorized to discuss the sensitive mediation. “We paid less than half the amount.”

The official added that the fate of five Assyrians who went missing during the abductions was still unknown.

ISIS attacked a cluster of villages along the Khabur River, sending thousands of people fleeing to safer areas and capturing the Assyrians over a period of three days. Over the next two days, the extremists picked up dozens more from 11 communities near Tal Tamr.

The Hassakeh province, which borders Turkey and Iraq, has become the latest battleground in the fight against the ISIS group in Syria. It is predominantly Kurdish but also has Arabs, Assyrians and Armenians.

On Friday, the predominantly Kurdish Syria Democratic Forces captured the IS stronghold of Shaddadeh in Hassakeh, where some of the kidnapped were once believed to have been held.

Many Syrian Christians, who make up about 10 percent of Syria’s pre-war population of 23 million, left for Europe over the past 20 years, with the flight gathering speed since the country’s conflict began in March 2011.