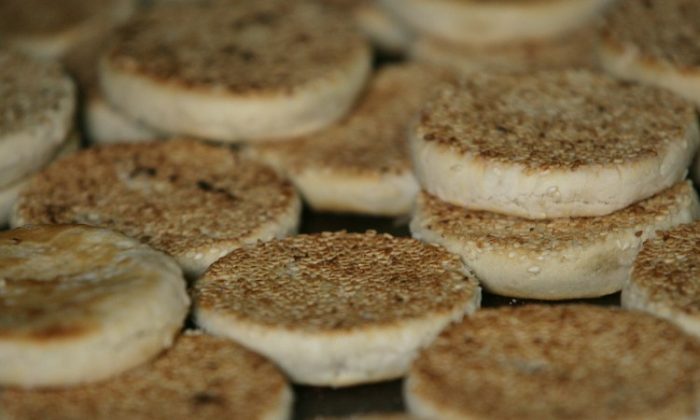 Cakes prepared for the Mid-autumn Festival are seen at a handmade crispy cake factory in August 2008. Tainted moon cakes and other school foods are blamed for one student’s death in China and hundreds sent to hospital. (China Photos/Getty Images)
China

Several separate incidents of tainted school food in two Chinese provinces during September have resulted in one death and hundreds of students being sent to hospitals.

Tainted moon cakes were blamed as the cause for several hundred students getting sick at a middle school in Wuqiang County, Hengshui City in China’s northern Hebei Province on Sept. 27.

According to Radio Free Asia (RFA), the school gave two moon cakes and a bag of milk to each student on Thursday evening. After eating them, half of the students had symptoms of food poisoning and were rushed to the local hospital.

Mr. Zhang, a resident, told RFA that his neighbor’s two children were victims of the food poisoning.

Some people said that five or six hundred students were affected, according to Zhang. After being administered intravenous drips, students with minor symptoms were sent back to school instead of being sent home, infuriating parents, he said.

“Many parents were loudly shouting and cursing in the street because the school didn’t inform them about the intravenous solution or the food poisoning. They just called and told the parents that their kids were sick,” Zhang said, adding, “Many reporters came and took photos, but none of the reports or photos have been seen so far.”

Parents suspected the moon cake workshop of having a “good relationship” with school officials.

“The workshop has already recalled hundreds of crates of moon cakes this morning,” Zhang said. “These cakes were sold to other shops besides schools, and a large number are still circulating.”

A state official at the Wuqiang Country Education Bureau told an RFA reporter on the telephone that none of this had happened. “There was no such thing, none. I am not trying to block the news, how can we? It is not possible to do so,” he said.

The local Health Bureau was slightly more forthcoming. “I heard of it, but I can’t be certain, so I can’t say anything,” the staff said to RFA.

A week earlier, on Sept. 21, children at Tongxing, a village-sponsored kindergarten, in Zunyi Cty, Zhengan County, of China’s southwestern Guizhou Province, also suffered food poisoning. Forty-two young children in the kindergarten had symptoms of diarrhea and vomiting and were taken to the hospital. One girl died on Sept. 26, and 23 children remained hospitalized as of Sept. 28, according to the Guiyang Evening Newspaper.

An RFA reporter, who called Zunyi Food Safety Bureau a week after the incident to inquire about the situation, was told that the test results were not yet completed and the cause of the illness still unclear.

Another incident of school food poisoning happened on Sept. 28 at Maqikou village elementary school in Ranghe Township, Lushan County, Hebei Province. Locals told Dahe.cn News Network that around 10 students vomited and complained of dizziness after eating the school breakfast. The students were taken to the township First People’s Hospital for treatment.

Similar cases of dizziness and vomiting also occurred to 26 students at Xiongbei Village Middle School in Lushan County after eating the school lunch on Sept. 7. According to RFA and Dahe News reports, the students, aged between 11 and 15, were taken to the First People’s Hospital in the County for treatment and released the following day.

Officials were similarly uncooperative to requests for information, and were sometimes belligerent.

“Why are you still asking? Do you believe the citizens or the government organs?” one official asked a local journalist in Dahe.

Food poisoning incidents are frequent in China, especially in schools, according to Liu Feiyue, who is in charge of Civil Rights and Livelihood Watch, a rights group.

He continued: “Some illegal businesses try to promote food products to schools. They give commissions to school administrative staff. After school food safety staff members receive their commission money, food safety checks become superficial. That is the cause of the problem and it results in frequent student food poisoning incidents.”