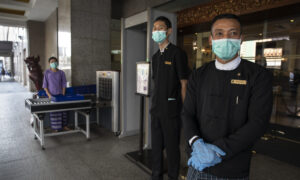 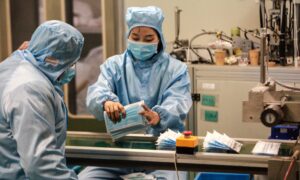 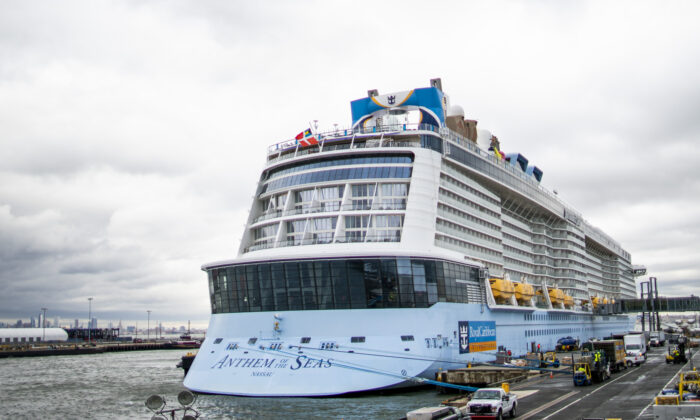 People exit the port after being aboard of Royal Caribbean Cruise Ship Anthem of the Seas in Bayonne, New Jersey on Feb. 7, 2020. (Eduardo Munoz Alvarez/Getty Images)
China Society

Scores of Chinese crew members of civilian ships and cruises have become stranded due to entry restrictions amid the pandemic. After months of waiting at sea, Chinese sailors have tried to send out their distress signals through Weibo, a Twitter-like social media platform. Crew members revealed on social media that over 1,000 Chinese sailors are trapped on cruise ships.

On June 8, the International Labour Organization (ILO) called for urgent and coordinated action to release the 150,000 to 200,000 seafarers trapped onboard ships around the world because of measures to contain COVID-19.

ILO Director-General Guy Ryder said, “Forcing exhausted seafarers to continue working more than four months beyond the end of their contract is unacceptable. This jeopardizes their health and endangers maritime safety. Action is needed now to ensure decent work for seafarers, avoid maritime accidents and environmental disasters. We call on governments to work together to make these crew changes happen in safety.”

However, Chinese crews are meeting resistance from Beijing.

The post indicated that three charter flights were arranged, but they were canceled one after another.

LeoooTao wrote, “Filipino colleagues were picked up by their government’s charter flights. Indian colleagues sailed back. The American, British, Ukrainian, Romanian, Korean, and Japanese all have returned. Why can’t we Chinese return to our dear motherland?”

These posts were deleted soon after.

Another Weibo user, “tristaYue,” pleaded for help on social media on June 5, saying that more than 200 Chinese sailors were trapped in Philippine waters. They sought the Chinese embassy’s assistance, but to no avail. Some crew members committed suicide or had a mental breakdown, according to tristaYue’s post.

Tristayue’s employer, the cruise company Holland America, transferred her to the Noordam ship on May 23. On June 4, the captain broadcasted two confirmed cases onboard. She then contacted the Chinese Embassy in the Philippines for help, but she did not receive a definitive response.

On June 6, she updated her Weibo account, saying that about 500 Filipinos and Indians were evacuated again while the Chinese crew stayed behind. She has had no mask to protect herself from being infected with COVID-19.

Many Chinese seafarers responded to tristayue’s post right away.

“They call me biu” wrote: “There are a total of 730 Chinese crew members distributed among four Royal Caribbean ships. Two are in the UK, one is in the Philippines, and the other is in Greece. The company promised a charter flight on May 28, but the Miami headquarters is still waiting for a landing permit from China.”

“MermaidMermaid” wrote: “I am also one of the trapped seafarers. When the crews of other countries get off the ship one after another, the Chinese crew members can only stay behind even though our home is right by the dock. Imagine the sadness. We have been drifting on the ship for more than 90 days since March!”

“Facing the sea Michael” wrote: “It’s almost three months since I’ve been trapped in the Philippines. We have more than 200 Chinese crew members, but no one paid attention to us. Multiple efforts to contact the embassy get us nowhere.”

“Cai Kexin” wrote: “Our ship was also stuck at sea for almost three months. The company would provide us a charter flight back to China. But the Chinese embassy disagreed!”

“XueYa text” wrote: “Officially suspended on March 15, as of today, it [ship] is still floating on the sea. Will be sailing to the Philippines around July, but there is still no news about returning home. The enclosed space, the atmosphere of panic, [we are] about to collapse.”

The Epoch Times could not independently verify the information in the Weibo users’ posts.

More than 80,000 Chinese seafarers are stranded at sea, China’s State Council said at a press conference on March 16.

During the pandemic, stranded Chinese also included students studying abroad. The situation has turned desperate for many of them.

China’s Civil Aviation Administration announced a “Five-One” policy on March 26, which means that in each foreign country, any existing Chinese airline is to operate only one route, and no more than one flight per week. This drastic reduction in the number of flights to China and soaring airfares have left many Chinese students desperate and stranded abroad.

There are also more than one million Chinese workers stranded in Africa, according to a foreign aid worker in Africa.