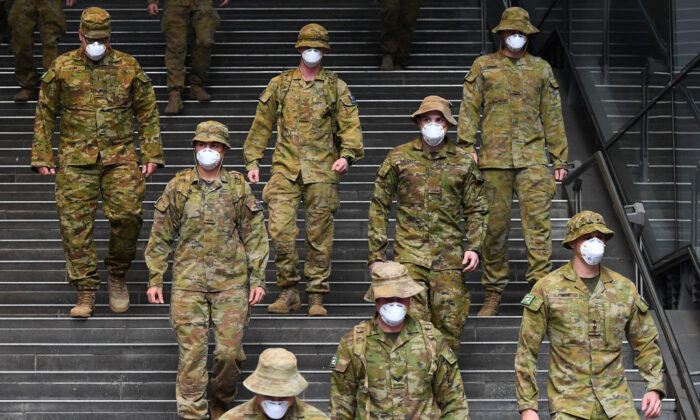 Members of the Australian Defence Force walk through the city in Melbourne, Australia, on July 27, 2020. (Quinn Rooney/Getty Images)
Australia

More than 430 members of the Australian Defence Force will spend Christmas Day on deployment both at home and overseas.

The Department of Defence told AAP 230 of these members would be overseas while 200 would be on operations and border protection duties in Australia.

About 15 defence force members were still in the Solomon Islands in the days leading up to Christmas and continued to provide support to Australian Federal Police officers and local law enforcement maintaining stability in the country.

Additionally, more than 150 AFP personnel are posted overseas across 33 countries.

Prime Minister Scott Morrison thanked the deployed Australians and wished them a merry Christmas at the end of a difficult year.

“Thank you to all of those selfless Australians. May God especially bless you and your families this Christmas, especially if you’re apart,” he said in his Christmas message.

“May those who have been alone this year experience the warmth of companionship this Christmas.”