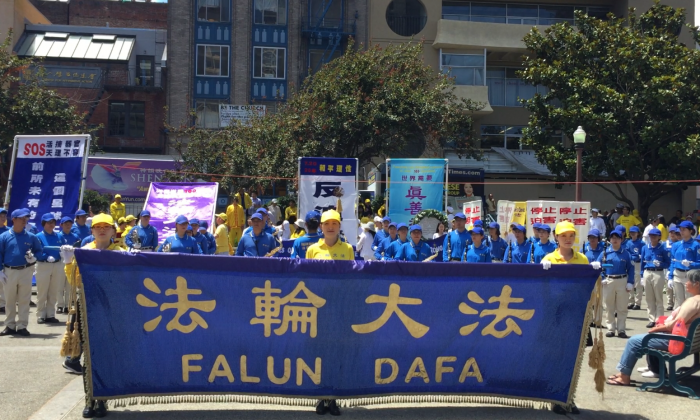 SAN FRANCISCO, Calif.—July 20, 2019, marks 20 years since the beginning of China’s persecution of Falun Gong and all adherents of the cultivation practice.

On the morning of July 20, hundreds of people gathered in front of San Francisco City Hall to prepare and march in a parade that called for an end to the two-decade long persecution.

“To us it’s very special because we have many Falun Gong practitioners who cultivate truth, compassion, and tolerance, and they are put into prison, mistreated in China for meditating. So, it’s a very sad situation in China, and it’s been going on for 20 years which seems like forever, but in reality, it’s a blink of an eye,” said Chris Kitze, a Falun Gong practitioner.

The parade consisted of banners that called for an end to the persecution that began on July 20, 1999, by Chinese Communist Party (CCP) then-leader Jiang Zemin.

A section of the parade was dedicated to individuals who have been persecuted to death by the Chinese Communist Party. People dressed in white carried flower wreathes with pictures of deceased Falun Gong practitioners.

The parade started at City Hall, traveled along Market Street, up to Chinatown, and ended in Chinatown’s Portsmouth Square.

At Portsmouth Square, members of the parade held a rally to explain the situation happening in China. Special guests and some Falun Gong practitioners spoke out against the persecution and told stories of the torture they faced under the CCP.

Some practitioners said that they were jailed for their beliefs and for practicing Falun Gong. Many were tortured and placed inside labor camps. Others talk about how they lost family members either as a result of physical beatings or live organ harvesting.

Neurologist Alejandro Centurion from Doctors Against Forced Organ Harvesting talked about the CCP’s practice of live organ harvesting. As a part of the torture and persecution, organs are cut and taken out of Falun Gong practitioners while they are still alive. The organs are then sold off for organ transplants.

“Forced organ harvesting is considered a crime, one of the problems against humanity and at present, is seen almost exclusively in China. Some investigators have called it a new form of evil, while the recent judgement last month from the International Tribunal in London called forced organ harvesting a crime of unmatched wickedness,” said Centurion.

He continues to explain that every year, countless practitioners are jailed and killed in a form of unethical and horrific medical abuse. It is no longer a debate of whether or not these crimes exist, but rather how we can put an end to it.

Centurion continued that China claimed the persecution and live organ harvesting ended in 2015, but “a Korean TV undercover investigation doctor, in 2016, confirmed that at least 1000 Koreans travel to China each year for organs.”

“China is currently number two in transplants worldwide, and they are expected to soon surpass the United States despite having only 500,000 registered donors compared to the 130 million donors here in the United States,” said Centurion.

Furthermore, obtaining organs for transplants only takes a couple of weeks as opposed to the months and years of waiting in other countries. This can only occur if there’s a readily available source from which doctors can obtain organs on-demand.

However, as speakers described, despite the persecution of Falun Gong, practitioners and adherents are continuously fighting to spread the truth about the CCP’s persecution and torture.

Fang Zheng is a former student protester during the Tiananmen Square protests of 1989. During the protests, a People’s Liberation Army tank ran over Fang’s legs, causing both legs to be amputated.

Fang explained that “Falun Gong has been persecuted for 20 years. There are a lot things I never thought of. One thing I never thought of was that despite 20 years of the CCP’s various forms of persecution, persecution of thousands of people, the Falun Gong community continues to grow stronger and bigger. Not just in China, but overseas, the number of people practicing is increasing.”

Parades, rallies, and peaceful demonstrations are held every year worldwide to spread awareness.

“It [the rally] also represents to me what America is about, about freedom of religion, freedom of being able to exercise your beliefs without duress, without having to worry about being attacked or arrested or anything like that,” said Taylor.