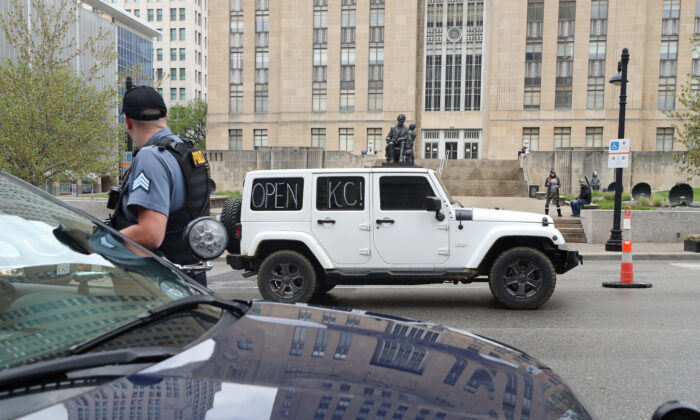 Protesters drive past City Hall encouraging people to demand that businesses be allowed to open up, and people allowed to go back to work, in Kansas City, Mo., on April 20, 2020. (Jamie Squire/Getty Images)
By Isabel van Brugen

Hundreds of demonstrators gathered in the streets of North Carolina and Missouri on April 21 to voice their discontent over lockdown measures put in place to curb the transmission of the CCP (Chinese Communist Party) virus, commonly known as the novel coronavirus.

Protesters in Missouri gathered at the State Capitol in Jefferson City on Tuesday, holding American flags and signs with slogans including “Tyranny Is Not a Cure!” And “All Jobs Are Essential,” while hundreds gathered in Raleigh, North Carolina, chanting “Freedom Now.”

Tens of millions of Americans have lost their jobs as a result of the lockdowns, which are aimed at curbing the spread of the CCP virus that emerged in mainland China last year, but have proven increasingly controversial as some orders close beaches, prevent people from buying seeds, and restrict travel.

The economic damage has led to increasing agitation for relaxing social-distancing restrictions, especially as the rate of CCP virus hospitalizations and other indicators of the outbreak’s severity have begun to level off in recent days.

Demonstrators in both states largely defied recommendations of health officials to wear masks in public and to adhere to social distancing measures as they took to the streets demanding that strict controls on public activity are lifted.

Missouri’s statewide stay-at-home order was extended until May 3 by Gov. Mike Parson on April 16. Under the order, nonessential businesses have not been required to shut, but they have been urged to adhere to social distancing requirements as detailed on the governor’s website. As of Tuesday, the state had at least 5,900 confirmed CCP virus cases and 189 deaths.

North Carolina residents, meanwhile, have been ordered to comply with the state’s stay-at-home orders until April 29. The order allows only essential businesses to continue operation, while following recommended social distancing measures. There have been 6,900 confirmed cases in the state with 213 deaths.

Roughly 95 percent of the U.S. population is now under stay-at-home orders, and many factories, restaurants, stores, and other businesses are closed or have seen sales shrivel. A record 22 million Americans have filed claims for unemployment benefits over the past month, wiping out almost all the job gains since the 2009 recession.

Demonstrations in the states came on the heels of large demonstrations held over the past week in states including Michigan, Minnesota, Virginia, Maryland, Washington state, and Colorado.

An estimated 2,500 people rallied at the Washington state capitol in Olympia over the weekend to protest Gov. Jay Inslee’s stay-at-home order, defying a ban on gatherings of 50 or more people.

Heading into the weekend, Trump issued separate tweets calling to “LIBERATE MINNESOTA,” “LIBERATE MICHIGAN,” and “LIBERATE VIRGINIA,” warning that Virginia was “under siege” over Second Amendment issues predating the lockdown.

On April 18, Trump defended the demonstrations, saying: “These people love our country. They want to go back to work.”

There are over 825,000 cases of the CCP virus across the United States and at least 45,000 deaths, according to a tracking map from Johns Hopkins University that collates official government data.