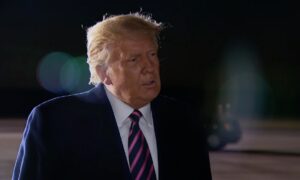 Several hundred people gathered on the steps of the U.S. Supreme Court late Friday to mark the death of Justice Ruth Bader Ginsburg, packing the steps of the high court as well as the street across from the U.S. Capitol in a nighttime memorial as they sang and held a candlelight vigil.

People left bouquets of flowers, small U.S. flags, prayer candles, and handwritten messages for Ginsburg on the Supreme Court’s steps. The justice, 87, died late Friday due to complications from metastatic pancreatic cancer, the court said. She served 27 years on the court.

“RBG inspired so many young women to follow their dreams and set their sights on things that so many people deemed impossible. And she made them possible,” Claire Shelby, 19, told Reuters. “I think that everyone out here tonight is here tonight to honor her memory and make sure she is not tarnished in history.”

Several times, dozens in the crowd broke out into song, singing “Amazing Grace” and “This Land is Your Land.” At one point, the crowd broke into applause—lasting for about a minute—for Ginsburg.

“Thank you RBG,” one sign read. On the sidewalk, “RBG” was drawn inside a pink chalk heart.

Jennifer Berger, 37, told The Associated Press, “I think it is important for us to recognize such a trailblazer,” adding, “It is amazing to see how many people are feeling this loss tonight and saying goodbye.”

In New York, an image of Ginsburg and the alternating messages “thank you” and “rest in power” were projected on the front of the New York State Civil Supreme Court building in Manhattan.

“Today, our nation mourns the loss of a trailblazer, not only in the field of law, but in the history of our country,” Trump said in the proclamation, adding that she was an “inspiration to all Americans.”

“Renowned for her powerful dissents at the Supreme Court, Justice Ginsburg epitomized powerful yet respectful argument; that you can disagree with someone without being disagreeable to them,” the proclamation read.

“Justice Ginsburg’s work helped bring about greater equality for women, secure rights for the disabled, and will continue to influence our nation for generations to come,” the proclamation continued. “In addition to her quick mind, she brought flair to the bench with her stylish jabots and her warm friendships among colleagues, even those with whom she often disagreed, most notably with the late Justice Antonin Scalia.”

“Her commitment to the law and her fearlessness in the face of death inspired countless ‘RBG’ fans, and she continues to serve as a role model to countless women lawyers. Her legacy and contribution to American history will never be forgotten,” read the proclamation.

Senate Majority Leader Mitch McConnell (R-Ky.) on Friday said the Senate would be allowed to vote on a replacement nominated by Trump. The court now has five justices nominated by Republican presidents, and three nominated by Democratic presidents.

Trump in early September announced a list of additional potential Supreme Court nominees in case a vacancy opened up.