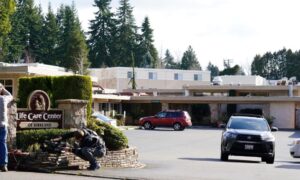 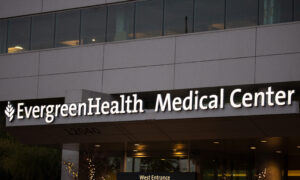 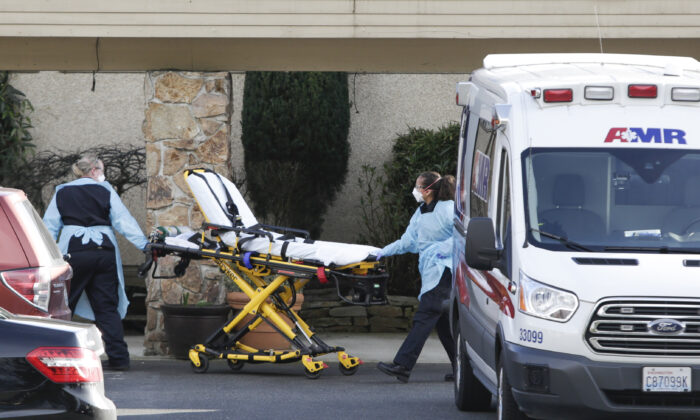 A stretcher is moved from an AMR ambulance to the Life Care Center of Kirkland, where one associate and one resident were diagnosed with COVID-19 on Feb. 29, 2020. (Jason Redmon/AFP via Getty Images)
US News

Hundreds in US Could Already Be Infected by Coronavirus, Research Suggests

Hundreds of people in the United States could already have the new coronavirus, experts found.

Researchers studied the genomes of two coronavirus infections in Washington state, one announced on Jan. 20 and the other reported on Feb. 28.

The second genome is on a branch in the evolutionary tree that descends directly from the first case, according to Trevor Bedford, an associate professor at the Fred Hutchinson Cancer Research Center and the University of Washington.

“This strongly suggests that there has been cryptic transmission in Washington state for the past six weeks,” he wrote in an analysis of the findings. The research points to a “substantial outbreak” in the state, likely a few hundred cases, he said.

It’s possible but unlikely that the genetic similarity is a coincidence. The two cases both have a rare genetic variant—found in only two of 59 virus samples from China that have been shared with researchers, according to Bedford.

Dr. Mike Famulare, a principal research scientist at the Institute for Disease Modeling, who performed the analysis, said that the virus could have infected between 150 and 1,500 people in Washington state if it was spreading undetected.

These people “have either been infected and recovered, or currently are infected now,” he told The New York Times. Many patients would have gotten COVID-19 only recently, and some wouldn’t be showing symptoms yet, he added.

The estimates in the model were based on currently known information about the incubation period and transmissibility. Questions about both aspects of the virus remain, along with the origins of the virus. The figures are “best guess, with broad uncertainty,” he said.

Dr. Scott Lindquist, the state epidemiologist for communicable diseases with the Washington State Department of Health, said that the analysis used “very limited data,” but he said, “I wouldn’t be surprised if there was transmission, and these two were related.”

Dr. Scott Gottlieb, former commissioner of the Food and Drug Administration, highlighted the findings on March 1.

“It’s an interesting analysis. There probably are more cases. We have community spread now in Washington state, California, perhaps Illinois or Oregon. So certainly hundreds of cases,” he said during an appearance on CBS’s “Face the Nation.”

Gottlieb is one of the experts who has called for expanded testing for the new virus. The case definition in the United States didn’t change for weeks, limiting testing of suspected infections. That’s now changed, along with the correcting of an issue with testing kits the federal government is manufacturing.

Testing for patients showing symptoms consistent with the virus, including a fever and coughing, is taking place across the nation. Patients tested positive over the weekend in Florida, Rhode Island, Oregon, Washington, and New York. Two patients have died in Washington state from the disease.

The United States has the capacity now to test 75,000 people for the new virus, Secretary of Health and Human Services Alex Azar said during an appearance on CBS’ “Face the Nation” on March 1.

“And within the next week or two, we’ll have a radical expansion even beyond that of the testing that’s available,” he said.

In another appearance, on ABC’s “This Week,” Azar didn’t answer directly when asked if he thinks the virus has been spreading in Washington state for weeks.

“We’ve always believed, and we’ve said publicly from day one that we would see more cases, that we would see spreading here in the United States. And this is exactly what we’ve been predicting all along,” he said.

The group that represents the labs told The Epoch Times that the goal is to get testing in all 50 states by March 5. The Centers for Disease Control and Prevention is working on taking testing through the flu surveillance network nationwide, Azar said.

Because national testing has been limited, case counts will rise quickly until authorities catch up with the estimated backlog in cases, said Dr. Eric Feigl-Ding, an epidemiologist at the Harvard T.H. Chan School of Public Health.

Data from past epidemics shows the number of case counts double every seven days, he said.

Still, public health officials are telling Americans that the risk to the average person in the United States remains low.

“We are working to keep it low. We will see more transmission of cases in the United States. We’ve got the finest public health system in the world here. This is what we do,” Azar said March 1.