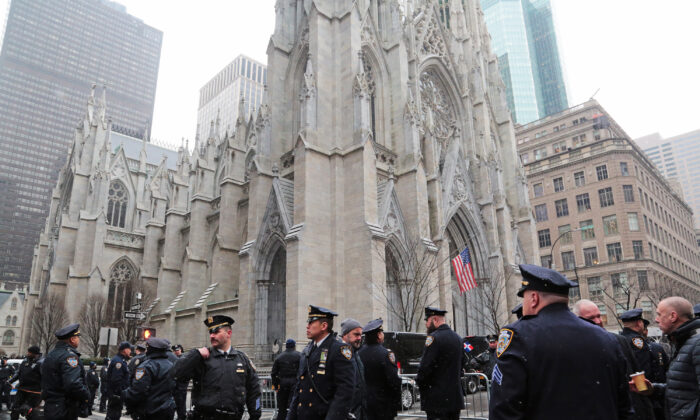 Fellow police officers turned out in the thousands during the funeral of Jason Rivera at St Patrick's Cathedral in New York on Jan. 28, 2022. (Richard Moore/The Epoch Times)
US News

NEW YORK—For the second day in a row, Fifth Avenue in New York City was awash in a sea of blue on Jan. 28 as thousands of NYPD officers descended upon St. Patrick’s Roman Catholic Cathedral for the funeral of their fallen brother, Jason Rivera.

The day before was Rivera’s wake. While attendees stood outside and braved only the cold for the wake, there was a light but steady snowfall during the funeral.

Attendance in the church was limited, so there were speakers set up on either side of the entrance for those on the street.

However, one set of speakers didn’t work.

The funeral began with organ music, a cantor, and a choir singing the traditional “Alleluia” hymn.

The Rev. Robert Abbatiello gave one of several eulogies, switching between English and Spanish.

“It surely seems, it seems, that death has the victory. But my brothers and my sisters, the sting of death and what appears to be death’s victory is not what brought us to this magnificent house of God today,” he said. “It is faith that brings us here today.”

Abbatiello spoke of how Jesus raised Lazarus from the dead and how Lazarus was destined to die a second time. “Unlike Lazarus, our brother Jason will never have to die again,” he said.

“Today, we salute Police Officer Jason Rivera for the last time,” he began.

NYPD Commissioner Keechant Sewell spoke briefly in both English and Spanish and promoted Rivera posthumously to the rank of detective first grade.

Rivera’s widow, Dominique Luzuriaga, held back tears—unsuccessfully at times—and spoke of the hours just before and after his murder, including an argument they had.

“You know, it’s hard being a cop-wife sometimes,” she said.

“This system continues to fail us. We are not safe anymore, not even the members of the service,” she said.

“I know you were tired of these laws, especially the ones from the new DA. I hope he’s watching you speak through me right now,” Luzuriaga said, which was followed by applause from the congregation.

She ended with, “I love you to the end of time. We’ll take the watch from here.”

Rivera was shot and killed in the line of duty on Jan. 21 while responding to a domestic dispute involving a mother and her son in the Harlem section of Manhattan.

As they did at the wake on Jan. 27, the NYPD had officers working the detail, including uniformed and plain-clothes cops, a K-9 unit, the Patrol Services Bureau, Emergency Services, and a few officers carrying AR rifles.

Rivera was a 22-year-old rookie and worked out of the 32nd Precinct.

Two other officers, including Wilbert Mora, also responded to the call. Mora was shot as well. The 27-year-old died from his wounds on Jan. 25.

A wake for Mora will be held on Feb. 2, with his funeral on Feb. 3, both at St. Patrick’s Cathedral.