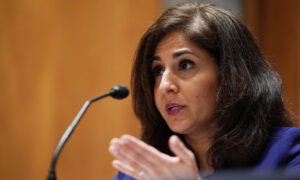 White House Chief of Staff Says If OMB Nominee Not Confirmed, They Would Find Her Another Role
0
Share Now
TelegramFacebookTweetEmailTellMeWeReddit
Copy Link
US

NORTH CHARLESTON, S.C.—A choir and band launched into one of Ethel Lance’s favorite gospel tunes and roused hundreds of mourners from their seats Thursday in a crescendo of music at the first funeral for victims of the massacre at a historic black church.

People stood to clap, nod, and sway—some closing their eyes under the exertion of the cathartic singing.

Ushers walked through the aisles with boxes of tissues for people to dab their tears as an organ, drums, and bass guitar played along.

The service was fitting for the 70-year-old Charleston native with “an infectious smile.” She served with vigor as an officer at Emanuel African Methodist Episcopal Church, said the church’s interim leader, the Rev. Norvel Goff.

“When it was time for the ushers to usher, she had the usher strut,” Goff said. “When sister Lance praised the Lord, you had to strap on your spiritual seat belt.”

Police officers stood guard and checked bags as mourners filed in for the funeral, which was held as the debate over the Confederate flag and other Old South symbols continued. A monument to former Confederate President Jefferson Davis had the phrase “Black Lives Matter” spray-painted on it Thursday, June 25,  in Richmond, Virginia, the latest of several monuments to be defaced around the country.

Lance and eight other Emanuel church members were killed when police said a gunman walked into a Bible study June 17 and opened fire in a racially motived attack.

Lance served as a sexton at Emanuel for the last five years, helping to keep the historic building clean, and she loved gospel music. She had five children, seven grandchildren, and four great-grandchildren.

“I want my grandmother’s legacy to be what she stood for, said granddaughter Aja Risher. “She is going to be a catalyst for change in this country.”

Services for Sharonda Coleman-Singleton, 45, were held Thursday afternoon, and funerals for the other victims were set to happen over the next week, including one Friday for the church pastor, the Rev. Clementa Pinckney.

As the two victims were laid to rest, the debate over Confederate symbols and statues raged on. In Richmond, where the Davis statue was vandalized, a small group from the Southern heritage advocacy group Virginia Flaggers waved Confederate Flags next to the monument.

Barry Isenhour, a member of the group, said they were offering a $1,500 reward for tips that led to the conviction of those responsible for the spray painting.

Some people in cars driving by honked in support of the Virginia Flaggers. Others yelled obscenities at the group.

While the group was there, 20-year-old Caleb Pollard ran around it, shirtless with American flag-themed leggings and underwear. He wore an American flag as a cape and pointed to it, asking the group: “Why don’t you raise this flag?”

In Memphis, Tennessee, the mayor there said he thinks the grave and statue of Confederate General and Ku Klux Klan leader Nathan Bedford Forrest should be removed from a city park.

The suspected gunman, Dylann Storm Roof, had a Confederate license plate, and images on a website created in his name months before the attacks show him posing with the flag and burning and desecrating the U.S. flag. He also poses at Confederate museums, former slave plantations, and slave graves.

Boyd Young, who represents Roof’s family, issued a statement on their behalf saying that they would answer questions later but wanted to allow the victims’ families to grieve.

“We feel it would be inappropriate to say anything at this time other than that we are truly sorry for their loss,” the statement said.

Gov. Nikki Haley started the groundswell against Confederate icons Monday, June 22, by successfully calling on South Carolina lawmakers to debate taking down the Confederate battle flag flying in front of the Statehouse. Then Alabama Gov. Robert Bentley, also a conservative Republican, brought down four secessionist flags at the Capitol there. He compared the banner to the universally shunned symbols of Nazi Germany, a stunning reversal in a region where the Confederacy was formed 154 years ago and where Jefferson Davis was elected president.

At Lance’s funeral, a family friend said she was glad to see so many states taking action.

“Knowing the tragedy that happened, with the young man holding the flag up, it’s time for it to come down,” said Alexis Mouzon, who went to high school with Lance’s daughter.