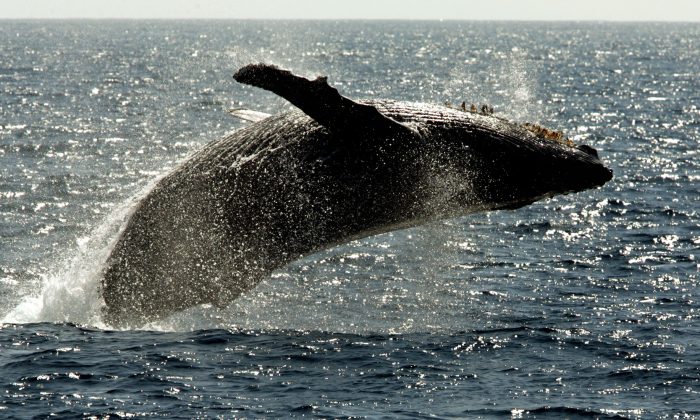 A humpback whale leaps out of the water in the channel off the town of Lahaina on the island of Maui in Hawaii on Jan. 23, 2005. The federal government is proposing removing most of the world's humpback whale population from the endangered species list. National Oceanic and Atmospheric Administration Fisheries announced on Monday, April 20, 2015, that they want to reclassify humpbacks into 14 distinct populations, and remove 10 of those from the list. (AP Photo/Reed Saxon)
Animals

HONOLULU—December usually marks the start of humpback whale season in Hawaii, but experts say the animals have been slow to return this year.

The giant whales are an iconic part of winter on the islands and a source of income for tour operators. But officials at the Humpback Whale Marine Sanctuary said they’ve been getting reports that the whales have been difficult to spot so far.

“This isn’t a concern, but it’s of interest. One theory was that something like this happened as whales increased. It’s a product of their success,” said Ed Lyman, a Maui-based resource protection manager and response coordinator for the sanctuary.

“What I’m seeing out there right now I would have expected a month ago,” said Lyman, who was surprised by how few of the animals he saw while responding to a call about a distressed calf on Christmas Eve. “We’ve just seen a handful of whales.”

It will be a while before officials have hard numbers because the annual whale counts don’t take place until the last Saturday of January, February and March, according to former sanctuary co-manager Jeff Walters.

“They don’t necessarily show up in the same place at the same time every year,” Walters said.

More than 10,000 humpback whales make the winter journey from Alaska to the warm waters off Hawaii to mate and give birth.

Lyman said the whales’ absence could just mean they’re spending more time feeding in northern waters, possibly because of El Nino disruptions or because their population has gone up.

“With more animals, they’re competing against each other for that food resource, and it takes an energy of reserve to make that long migration over 2,000 miles,” he explained.