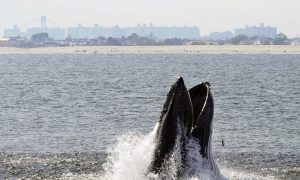 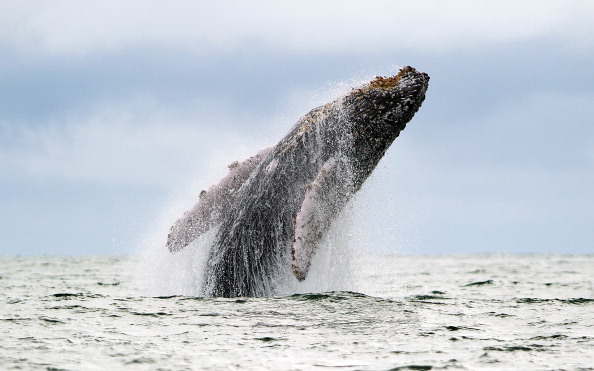 A Humpback whale jumps in the surface of the Pacific Ocean at the Uramba Bahia Malaga natural park in Colombia, on July 16, 2013. (Luis Robayo/AFP/Getty Images.)
Environment

What is similar between a clock and a humpback whale? The tick-tock sound! In a recent study conducted on humpback whales, it has been found that the marine mammals make a kind of tick tock noise at night, which helps them to trap their prey as well as to invite other whales to share the meal.

Humpback Whale, while hunting together at night in deep dark waters, make “tick-tock” noises.  Fishes like eels are drawn out by this noise and are preyed on by the whales.

Susan Parks, assistant professor of biology in the College of Arts and Sciences at Syracuse University, with her colleagues has been studying how humpback whales exactly locate their meal at night, with little or no light. She says,

“Humpback whales are known to cooperate with others to corral prey near the surface. Recent studies suggest they may cooperate (with each other), when feeding on bottom prey, as well.”

Parks was a part of a combined consortium involving various institutions that has spent a decade studying humpback feeding behaviours in the Gerry E Studds Stellwagen Bank National Marine Sanctuary, off the coast of Massachusetts.Whales were tagged with special underwater recording devices to establish how specific acoustic sounds associated with successful sea floor feeding.

The investigation found that while hunting together at night in deep, black water whales make “tick-tock” noises, but are silent when hunting alone.

Finding snacks like krill, plankton and small fish on the seafloor in the dark is difficult. Therefore, to navigate and find potential prey, humpbacks make the noise as a group.Humpback whales mainly feed on sand lance at night – eel-like fish known to bury themselves in the sand of the ocean floor. Parks suggests that whales’ vocal sounds may help flush the sand lance out of hiding to where they’re scooped up and eaten.

While feeding late in the night in the dark, the clock-like sounds created by whales may also serve as a call to other nearby whales indicating that food has been found; something like a dinner gong.

“Hints of behaviour suggest that other whales who overhear the sounds are attracted to them and may eavesdrop on other whales hunting for food,” Parks added.

Humpbacks are in general known to be very vocal. The plaintive singing of the whales comprising moaning, howling and crying noises can be heard over a long distance. Though scientists have a good amount of recording of these whales’ singing, they are still interpreting the meaning of such sounds. They believe that humpbacks sing to converse with others of its species and perhaps to attract potential mates.

The recent findings, though show the intelligent way of communication and hunting at night that the species has devised. The study is published in the journal Scientific Reports.

This article was originally written and published by Ramya Naresh, a contributing author for indiasendangered.com. For the original article and more information, please click HERE.