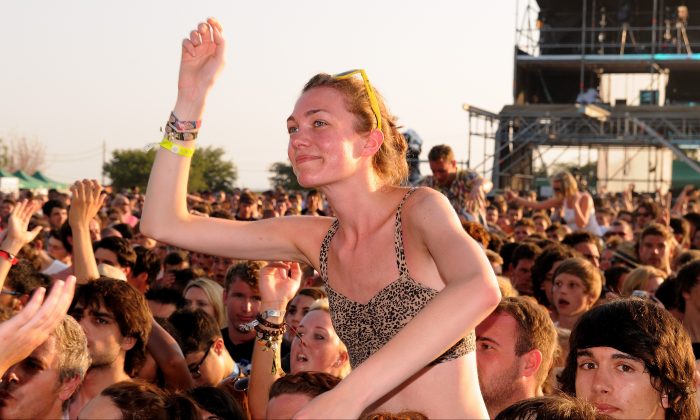 Humor: From Underwear to Outerwear—Notes From Lollapalooza

Chicago—On the 50th anniversary of Woodstock where blue jeans and headbands were the rule of the day, a new uniform was in evidence at Lollapalooza: bralettes and short shorts. Girls by the thousands flocked to the annual four-day music festival in what those of use over 30 would consider… their underwear.

There they were on the streets, on the subway, on the sidewalks, insouciantly guzzling beer as if they weren’t giving the dressed world an unexpected and, to some extent, unprecedented, peep show.

Sure “Daisy Dukes” dates back to the 1980s when Catherine Bach sported them on the Dukes of Hazzard TV show. It was a fashion style once called “cheesecake.” But then, the network made her wear flesh-colored tights underneath the short shorts to cover her buttocks cheeks (and more). This year’s Lollapalooza’s participants even supplanted short shorts with thongs and G-strings.

Moreover, Bach did not pair her Daisy Dukes with bralettes—the barely-there bras which offer neither support or coverage and have helped to retire traditional bras. In fact, Bach often covered her midriff and sometimes even wore sleeves. Go figure.

To those of us not wearing our underwear in public, what do these fashion trends mean?

Youth culture has always rested on conformity. Before black leggings took over in the late 1990s, no one (except your parents) would be seen in anything but blue jeans.

Women have the right to bare all in public and not be harassed by sexist men such couture announces. Moreover, if all young women bare all, why would one be singled out for harassment?

If the music, recreational drug use, sexual behavior and clothes of a younger generation don’t shock the older generation, they are not doing their job.

Gen Z is the fattest generation in history with women harboring gigantic thighs, huge derrieres, and protruding abdomens. Flaunting, not hiding, such obesity is a triumph of fat acceptance.

The Lollapalooza women may be overweight but their skin is free from sun damage, wrinkles and of course leg veins–at least for now. If you’ve got it why not show it?

When Underwear Was Hidden and Constrictive

Fifty years ago when women hit puberty and gained “curves” they were automatically encased in a girdle. It was a right of passage. Some women even wore girdles under their bathing suits, so strong was the taboo against “jiggling.”

Before pantyhose were invented, the girdle would hold up nylons, with garters leaving a “demilitarized zone” between the nylons and girdle that forced women to sit “ladylike” with their knees together. “Bare legs” without nylons were frowned upon. Similarly, wearing see-through dresses and skirts without slips was frowned upon. Who remembers slips?

Before push-up and underwire bras, funneling, “collie muzzle” bras were the standard. Because they caused excessive “directionality,” they were chided as creating an “all night salute”—the opposite of today’s bralettes.

In the 1960s and 1970s could anyone have foreseen that more forgiving underwear was on the horizon? And that it would be elevated from underwear to outerwear?